Traffic engineering is about people: where do they come from, where do they go? And how do you help them to find the best way to their destination? Being an expert on transportation, Eric van Berkum knows all about this. In a more symbolic way, his colleague Rita Kizito also guides people to new places – by empowering students and connecting them to professionals who can help them grow. ‘I want to expand our network to other communities.’

It takes a village to raise a child

After an extensive career in South Africa, educational specialist Rita Kizito decided to step into one more big adventure. Since November 2020, she’s the Programme Director of ATLAS, the University College Twente. At first glance, her life story is quite the opposite of Eric van Berkum’s. Rita was born and raised in Uganda and has worked at five different universities, while Eric’s rooted at his home base in Twente. But when you look closer, you’ll notice the two experienced professionals actually do have an important thing in common. ‘The opportunity to build networks lies within all of us.’

Eric: ‘Hi Rita, I understand you’ve just arrived in The Netherlands. What made you decide to come to the UT?’

Rita: ‘I was intrigued by what ATLAS is doing; getting away from traditional disciplines to develop an interdisciplinary approach to science. It’s quite a new programme, we’ve had six cohorts of students so far. The approach is very personal as well. Students can select their own courses and choose topics they’re interested in. A person who graduates here, is what I would call a socio-engineer – someone who can really solve the problems of today. Aiming at that, I think ATLAS stands for a new way of teaching in the 21st century. So that’s why I’m here: to see how that can be done.’

Eric: ‘I hear you’ve come to the right place. University of Twente was actually founded from the idea that technology has a role in society. My research area, for example, is transport engineering. Obviously, people deal with transportation, so there’s always a human aspect in what we do. Anyway, I’d like to know more about the personal switch you’ve made. Moving here from South Africa seems like a huge change. I mean, Johannesburg is a major city, while Enschede is relatively small… And being away from your loved ones – it’s a sacrifice, isn’t it?’

Rita: ‘I don’t see it as a sacrifice, actually. Maybe because I’ve always been adventurous. Since I’ll retire within a few years, I asked myself: what has my career been like, as a whole? I want to use these last years to make the best contribution I can – for myself and for the community.

‘You see, my previous job was very operational, to say the least. I was spending a lot of time managing stuff, trying to be sure things were running smoothly. Many universities in South Africa are quite conservative and traditional in their approaches. Although they want to change, they can only do so to a certain limit – because of culture, traditions and organizational structures. So from a personal point of view, I was looking for a space where there’s more room for debate and discussion. At UT, there is ground to look at things in a different way.’

Eric: ‘What would you think is the main difference between the South African and the Dutch educational system?’

Rita: ‘Oh, there’s a lot of differences! In South Africa, the educational system was forged around racial boundaries. Because of Apartheid, there was a white educational system, a black system, an Indian system and a coloured system. The elite universities were historically white, and they were either very English – you know, like Oxford – or more Dutch-oriented. These are what are termed research-intensive universities. Then there were the history black universities. You now have the university of technologies, which were formerly technological colleges that offered vocational oriented programs. And then there’s the comprehensives. They are trying to merge the best of both worlds.’

Eric: ‘Wow, that sounds quite complex. When I was studying at UT in the 80s, all students were Dutch. All classes and courses were in Dutch, too. Only the last ten years or so, that changed quite dramatically. Coming from another continent, how do you look at this policy of internationalisation?’

Rita: ‘Well, of course I wouldn’t be here if things had stayed the same. But I have to say, I think an institution also needs to preserve its own culture and identity. Right now, we want to attract more students to ATLAS, also from the surrounding areas in The Netherlands. That means Dutch students need to feel at home, as much as the internationals. Looking at myself: even though I’ve lived in South Africa for forty years, I’m still a representative of Ugandan culture. Because I was brought up in that place, I’ve developed values which I have carried around a long time.’

Eric: ‘What would you say is specific for Ugandan culture?’

Rita: ‘We are very family-oriented. In Uganda, the maternal is strong and decisive, but at the same time it’s very submissive. It’s funny: as an outside observer, you would put the man as the head of a family. But when you look closer, it’s actually the woman! It’s never openly said though, since we’re raised to elevate the male as head of the family.’ 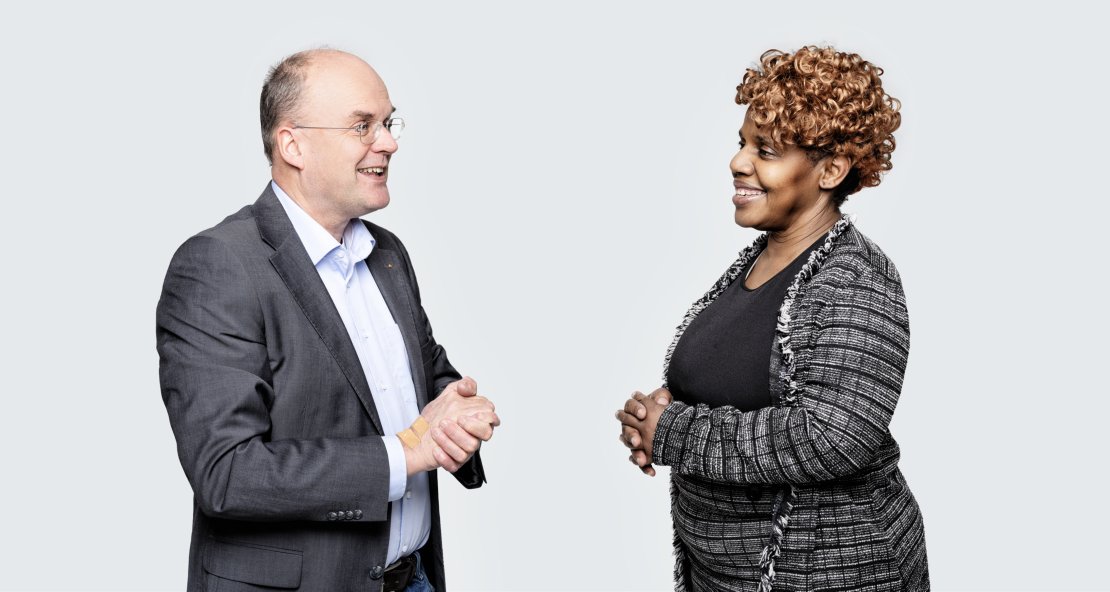 Eric: ‘Ha ha, that sounds familiar. As men we’re often made to believe that we’re the leaders, while actually it’s the women who are in charge…’

Rita: ‘Yes, exactly, ha ha ha! Another thing that comes to mind is the way we nurture our children. It wasn’t only my father and mother who raised me – the whole community played their part. When I walked home from church, I always stopped at each household on the way home, to say hello. My point is: as a kid, you aren’t just a member of your own family. You belong to the whole village.’

Adding value to others

Eric: ‘What is your family like, today? Did you bring them here?’

Rita: ‘No, my children are adults. One lives in Canada, the other in South Africa. Actually, I hoped one of my sons would come join me here. He’s an entrepreneur, and I thought UT could be a good place for him to meet similar people…’

Eric: ‘That reminds me: at one point I had a PhD student from Kenya. He had an excellent, impressive network, he knew people from all around the world. Would you say this is something typically African?’

Rita: ‘Not necessarily, because the opportunity to build networks lies within all of us. But I do think community building is not a very European value. Like I mentioned earlier; in Uganda, we have a way of seeing that the community is always bigger than yourself. What I do might be small, but it can add value to everybody around me. Maybe we can bring a bit of that philosophy here, too…’

Eric: ‘That Kenyan student often told me he was brought up by people telling him stories. This value of storytelling was something he missed in European society. Don’t you think such attitude towards connecting and learning is something that can greatly define our life?’

Rita: ‘Yes, you’re right, it never stops. And the best we can do is empower the young ones, so they can learn from us. So maybe my contribution here in Twente would be that: to expand our network to other communities, who haven’t had the privilege of getting access to what is happening here. I mean, I’ve seen impressive things happening at UT. Artificial intelligence, robotics…woah! I’m getting excited to attract more people this way. Come and join, be part of this!’

is the programme director of ATLAS, the University College of Twente. She grew up in Uganda and worked in South Africa for almost 40 years, at various educational institutions – among which the University of the Witwatersrand and the Nelson Mandela University. Her specialties are curriculum design, learning activity design and technology-enhanced learning.