Since the Dublin Conference in 1992, there is consensus that the river basin is the appropriate unit for analyzing freshwater availability and use. An underlying hypothesis of the research programme at the University of Twente is that it is becoming increasingly important to put freshwater issues in a global context. Although other authors have already argued thus, we add a new dimension to the argument. Local water depletion and pollution are often closely tied to the structure of the global economy. With increasing trade between nations and continents, water is more frequently used to produce exported goods. International trade in commodities implies long-distance transfers of water in virtual form, where virtual water is understood as the volume of water that has been used to produce a commodity and that is thus virtually embedded in it. Knowledge about the virtual-water flows entering and leaving a country can cast a completely new light on the actual water scarcity of a country. For example, Jordan imports about 5 to 7 billion m3 of virtual water per year, which is in sharp contrast with the 1 billion m3 of water withdrawn annually from domestic water sources. This means that people in Jordan apparently survive owing to the import of water-intensive commodities from elsewhere, for example the USA.

A second hypothesis of the research programme is that it becomes increasingly relevant to consider the linkages between consumption of people and impacts on freshwater systems. This can improve our understanding of the processes that drive changes imposed on freshwater systems and help to develop policies of wise water governance. In 2002 Hoekstra introduced the water-footprint concept as an indicator that maps the impact of human consumption on global freshwater resources. The water footprint of an individual or community is defined as the total volume of freshwater that is used to produce the goods and services consumed by the individual or community. A water footprint can be calculated for any well-defined group of consumers, including a family, business, village, city, province, state or nation. The water footprint of a nation for example shows water use related to consumption within a nation. Traditionally, national water use has been measured as the total freshwater withdrawal for the various sectors of the economy. By contrast, the water footprint shows not only freshwater use within the country considered, but also freshwater use outside the country’s borders. It refers to all forms of freshwater use that contribute to the production of goods and services consumed by the inhabitants of a certain country. The water footprint of the Dutch community, for example, also refers to the use of water for rice production in Thailand (insofar as the rice is exported to the Netherlands for consumption there). Conversely, the water footprint of a nation excludes water that is used within the national territory for producing commodities for export, which are consumed elsewhere.

Objective of the programme

The objective of the research programme is to examine the critical links between water management and international trade and between consumption and freshwater impacts. Questions posed are: Can trade enhance global water use efficiency, or does it simply shift the environmental burden to a distant location? Does import of water in virtual form offer a solution to water-scarce nations or does this result is undesired ‘water dependency’? How can quantitative analysis of expected or desirable trends in international or inter-regional virtual water flows contribute to water policy development at different levels of spatial scale? How can water footprint accounting become part of the regular practice of governments and businesses and how can it feed into better water policy making? How can water security of communities can be guaranteed by a combination of policies to bring along changes at local, basin and global level? How will the growing demand for bio-energy increase the global water footprint of humanity? Questions like these and others are being addressed in various sub-projects, involving MSc and PhD students from various parts of the world. 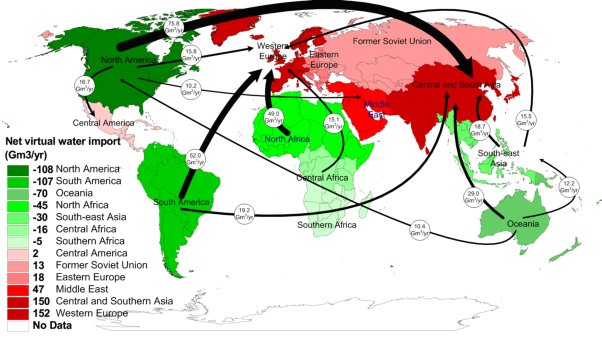 Projects under the Globalisation of Water programme

Publications are downloadable at: