Dike ring 6 Groningen-Friesland is the largest dike ring in the Netherlands. Flooding from the sea is expected to cause 1,000 to 100,000 casualties and an economic damage between 10 and 100 billion euro (RIVM, 2004). In most areas the land surface is subsiding by a few centimetres per decade up to more than a decimetre per decade. Flood defence policy in the Netherlands has traditionally been directed towards controlling chances of flooding, not at adapting to floods or minimizing potential damage if floods occur. As a result, flooding risks are of the type “small-chance-large-effect”. Although the product of chance and effect is still relatively small, the potential damage has become too high to be ignored. A few developments in the area of risk thinking ask for a re-evaluation of the current flood defence policy. This should be done in the context of tuning the various social, economic and environmental interests that put claims on the use of space. 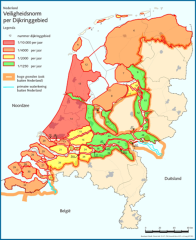 The objective of the proposed project is to develop flood security strategies that reduce the vulnerability of the area to flooding and combine conflicting interests such as nature, recreation, etc. The project will result in a planning support tool or a simulation game that can be used by researchers and policy analysts to assess the effects of different policy strategies on various relevant indicators.

The flood security strategies that are being developed are the self-preparedness strategy, the broad robust coastal defence line and compartmentalisation.

The first strategy tries to reduce the systemic risk by making inhabitants and (governmental) institutions more prepared in case of a flood. By knowing how to act during a flood one is less dependant on help from a higher institutional level. By dividing the flooded area in smaller units which will all have their own shelter, security can be organised in smaller, thus more efficient way.

The broad robust coastal defence line (ComCoast) is a European project which is an alternative for the expensive heightening of dikes. Besides it combines several functions like increased space for recreation and nature.