Powder agglomeration is a widely encountered phenomenon in many industries such as pharmaceutics, additive manufacturing, food processing and so forth. A fast and accurate numerical model of agglomeration is therefore highly desired. We have developed a multiscale approach to extract the macroscopic bulk behavior of powders from the microscopic particle-particle interactions. The aim of this project is to extend this model to also include particle-fluid interactions. The extended model will specifically be used for applications that involve high pressure powder agglomeration, a.k.a. tableting.

The particle-fluid coupling is incorporated using two open-source codes: MercuryDPM as the particle solver and oomph-lib as the finite element method (FEM) fluid solver. The current work focusses on under-resolved coupling, using the Anderson-Jackson formulation, with the particle volume fraction extracted from discrete particle simulation. This will then be applied to the die filling process and powder compaction to study the tableting process. In the current state of the code, 3D two-way coupled, the behavior of a particle-fluid system can be studied for example in particle settling (see Figure). 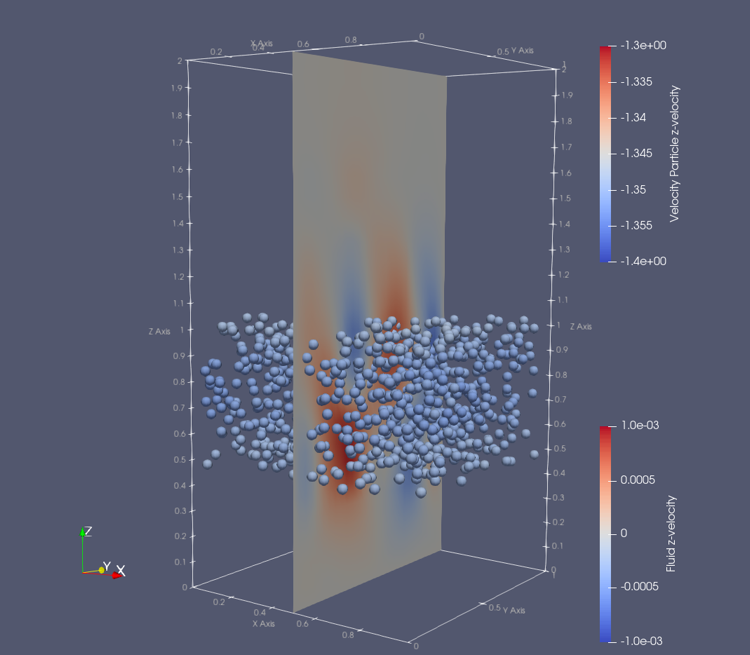 Two-way coupled simulation of particles settling in a fluid.