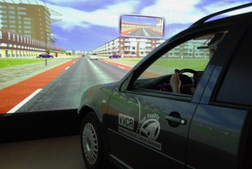 Driving is a complex and demanding task, which continuously needs to be performed in a safe and time-efficient manner. Advanced Driver Assistance Systems (ADAS) could potentially benefit both traffic safety and driving comfort by supporting drivers in their driving task, but development of these systems is often done in a technology-driven manner instead of problem-driven. In a safety-critical system such as modern day traffic, it could be beneficial to search for driver needs before developing a system that ultimately changes the driving task. But in order to give recommendations for the development of ADAS, we first need to understand the structure of the driving task, and the way in which the execution of subtasks takes place.

A very influential model in driving behaviour studies is the hierarchical driving task model proposed by Michon (1971, 1985). The model describes how the driving task is built up as a hierarchical, three-layer task, with interaction between these three levels. At the top level, called the strategic level, goals about the trip and the arrival time are set. In the middle (tactical) level, all tasks relating interaction with the road and other road users are performed. And at the lowest level, the operational level, all tasks involving vehicle control take place. Michon (1971, 1985) describes how in normal driving, top-down goal management enforces that the road trip and route determine lower level goals such as taking a specific turn, and turning the steering wheel in a certain way.

According to Michon (1985), driving behaviour sometimes changes from top-down interaction to bottom-up interaction when a driver encounters an unexpected situation to which behavioural compensation is required. We were interested in determining how this directional change manifests itself in driving behaviour, and conducted an exploratory driving simulator experiment into the reactions to unexpected events on the road. Our hypothesis was that driving behaviour would be adapted during safety-critical events, resulting from directional changes in task level interaction, but there were no expectations on the duration of this adaptation.

This first study revealed that drivers drive more cautiously after a safety-critical event. However, their cautious driving style quickly disappears when the driver is under pressure, for instance from elevated mental workload. Furthermore, the criticality of the event appears to play an important role in the selection of the driving style.

In order to investigate this relationship between mental workload, unexpected events and driving behaviour, a second driving simulator study was conducted in a moving-base simulator. The results from study are currently being analysed, and its results will be used to give recommendations on the situations in which drivers might need support from a Driver Assistance System.

Nina Schaap received the Best Science Paper Award at the TRAIL International Conference in 2008, and the first prize in the CTIT poster competition in 2009. She was also nominated for the Young Researchers Award at the 2008 conference of the European Network of Excellence HUMANIST.