UT researchers succeeded in the rapid fabrication of microscopic ‘antibubbles’. Previous methods to produce these liquid droplets surrounded by an air layer were either lack of controllability or prone to clogging and were much slower. The team of researchers recently published their findings in the scientific journal Advanced Materials.

Antibubbles that are smaller than one millimetre provide many applications in, for example, the food and pharmacy industry. Their hydrophobic – but porous – shell gives the antibubbles an outside air layer for extra protection. Together, both layers can keep the antibubble intact for several days. “With ultrasound, we can break the hydrophobic shell at a specific moment, after which the antibubble releases its content. This is for example useful for the controlled release of medicines, at specific locations within the body”, explains first author Jieke Jiang.

Jetting through a Liquid Layer

To create these useful microparticles, the researchers developed a new concept in which a nozzle is jetting through a liquid layer (JetALL). Jiang explains: “We designed and 3D-printed a small, cone-shaped reservoir that holds the liquid layer. The cone is big enough to prevent clogging but small enough to hold the layer together by its surface tension. The liquid layer is a suspension with silica nanoparticles which forms the outside hydrophobic shell. This shell stabilizes the air layer that forms the antibubbles.” 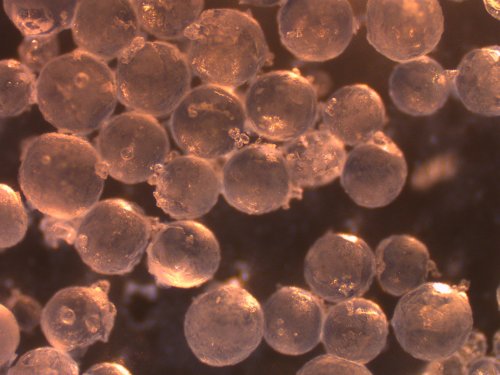 The new method is rapid; it generates microcapsules at flow rates up to 3000 capsules per second. The capsules are very similar in size. Jiang: “We measured them to be all between 100 to 150 micrometers for one of the samples.” Other bio-degradable materials, such as polylactic acid (PLA) could also be used as a protective shell, instead of the air layer. This tunability provides great opportunities for the use of drug delivery, where you want to determine the optimal dose of medicine precisely.