Inaugural lecture Gert-Willem Römer 27 October 2022
Professor Gert-Willem Römer of the University of Twente says it’s one of his pet peeves: in many science fiction and action films, lasers are used in a way that completely defy the laws of physics. Take lasers that blow up spaceships. These lasers make a sound when they’re fired, but space consists of a vacuum, so sound doesn’t travel there. What’s more, the laser beam propagates from one spaceship to another in a straight line. This means that as an innocent bystander to the space battle, you wouldn’t be able to see the beam, except if your eyes were exactly in its path. And that would end very badly for you.

Eleven huge batteries in a wristwatch

Another famous user of lasers is James Bond. In the action movie Die Another Day, for instance, he uses a red beam from a laser source embedded in his wristwatch to burn a man-sized hole in the ice of a frozen lake. A simple calculation shows that using a red-coloured laser beam to cut such a hole would require eleven batteries the size of a beer keg, which wouldn’t be very practical for a wristwatch. 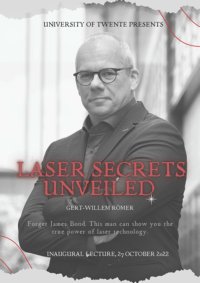 “Rather than a diode laser, James Bond would’ve been better off using a YAG laser or a CO2 laser as the ice would much better absorb the light from the latter two. Thing is though, the colour of those lasers isn’t visible to the human eye, which would make the film a rather dull affair...”

The next generation of production machinery

Professor Römer’s research focuses on using lasers for more useful  purposes, i.e. as a tool for processing materials. Examples include 3D printing of large metal parts for the offshore industry, making water and ice-repellent titanium surfaces for aviation, and creating micro channels in transparent materials, such as glass, for use in medical equipment.

“Contrary to almost all other forms of energy, the properties of laser energy can be optimised for processing. This means the absorbed laser light can have the maximum physical, chemical or biological effect, which makes laser-based production machinery much faster and more precise than conventional machinery.”

A laser can be used to produce parts and components with very specific properties like no other production method can. “Add to that how easy it is to digitise laser machines, and it’s clear that laser processing of materials has the potential to be the most versatile and flexible tool for the next generation of production machinery.”

Professor Römer’s Laser Processing Group does not only focus on the application of laser sources in production machinery. More fundamental research, for instance, is carried out into the optimisation of energy distribution within a laser beam. Together with undergraduates and PhD candidates, researchers are developing innovative optical beam-shaping components, allowing quick and flexible processing of the energy distribution.

The University of Twente invested in two state-of-the-art laser sources to support this research. One of these sources has no less than 10,000 watts of laser power, which is the highest power that’s available for research in the Netherlands. The other laser source  emits extremely short laser pulses, with pulse periods  ranging from femto- to picoseconds, which allows for processing materials at the micrometre and even nanometre scales. Research using these laser sources is making a unique contribution to the university’s Creating Intelligent Manufacturing Systems research theme.

Professor G.R.B.E. Römer will deliver his inaugural lecture at 16:00 on 27 October 2022 in the Prof. ir. M. P. Breedveld hall and Foyer, in the Waaier building on the University of Twente’s Enschede campus. His research on laser processing of materials is embedded in the Faculty of Engineering Technology (ET). The associated degree programme is Mechanical Engineering.