As of 1 April 2021, Dr. B. (Biba) Visnjicki will be leaving the Fraunhofer Project Center at the University of Twente. Biba has been working as the managing director of the center since 2017. 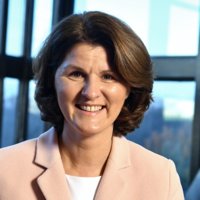 University of Twente and Fraunhofer IPT would like to express their thanks and appreciation to Biba: for her dedication, energy and vision, which have contributed greatly to the growth of FPC@UT. Over the last few years, an excellent foundation for continued growth and success in the near future has been laid.

We wish Biba all the best in the following steps of her career.

Learn more about what the Fraunhofer Project Center at the University of Twente has been working on in the online InnovatieNu magazine, which also holds an interview with Biba.