Canoes: check. Van: check. Trailer: check. Training: check. Everything was prepared for another wonderful trip to our neighbouring country. Two years ago in Köln, 4 podium places were reached, but none of them was the first place. This had to be better this year, and we made sure that we had done everything in our reach to achieve this.

A trip to Heilbronn with a trailer is quite long. Including some real German Stau, the trip from Enschede took about 8 hours. Enough time for our racers to relax and prepare for the Saturday. After arrival, an exploration of the exact parours was made with the new training canoe, which has the identical shape of our concrete canoes. We wanted to be prepared for everything, and leave nothing to chance. It became clear that the lanes would be small, so there was few margin for manoevering for any of the boats.

Friday night we got to know some of the German teams in a more informal setting. German people are good people, we have not know anything else since we joined the German BetonKanu-Regatta in 2009. Nevertheless, where some German teams mainly enjoy this first night of the weekend, we always focussed on the day after: raceday.

Our early Saturday morning started just after 8:00 when the first men's team had their first series race. Even though it was an early start of the day, everyone was highly motivated to make sure prices would be won. The entire team was focussed on making sure that the right people would be in the right canoe, in the right lane, at the righ time. 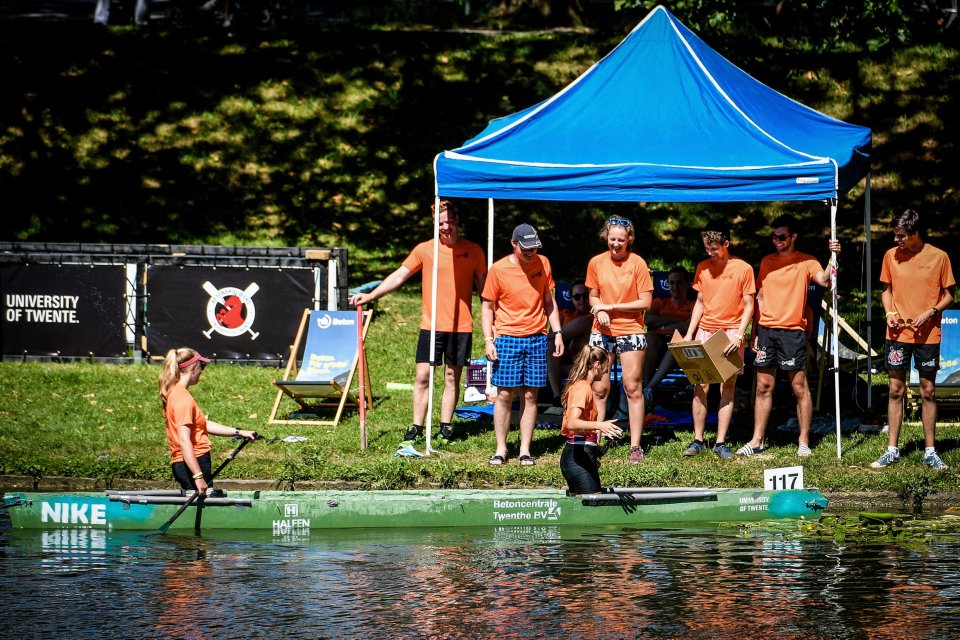 The morning flew by, and before anyone realised, it was time for the semi-finals. During the men's semi-finals, we had a bitter pill to swallow. After initial succes, and reaching the turning point very quickly, one of the men's teams was blocked in an unfortunate way by two other canoes. A great catch-up followed after the path got cleared, but it was of no avail. Jeroen and Kai were half a canoe short of reaching the final. The other men's team did their best to keep up the good name of Twente, but in their semi-finals, the compition was simply too strong.

Fortunately, the women's race was still up for scratch, and we got one women's team left in the semi-finals. After a race were the team of the BetonBrouwers encountered some branches and some leaves from the trees leaning over the parcours, a spot in the final was secured. The women's final started of with a neck-to-neck race with the team of HTWK Leipzig, the main competitors. The Germans reached the turning point slightly earlier than our girls, but where bad luck was with us in the men's semi-finals, it was with Leipzig in the women's finals. One of the Leipzig girls fell overboard, and the Twente girls managed to take the first place. "Unbelievable," was everything that Marit Lambers can say while she just finished. "Where the men had problems with the turn, luck was on our side here. Amazing that all the efforts of the past year, ranging from desiging, constructing and training have the most amazing results for us as BetonBrouwers!"

An amazing race, an amazing season. After the 2nd and 3rd places in Köln, the BetonBrouwers are back at the place where they belong: 1st place. Nevertheless, we still have to continue our renewed progress. First step: the Dutch Concrete Canoe Race of 2020. Where: unknown. Will we be ready: yes!