The preparations for the 2019 season started already as soon after the summer break of 2018. Since 2019 would be a year where there would be a race in Germany again, it was important start training and selecting the best canoeing teams as soon as possible. In order to have some new, fresh minds joining the team, the first canoe of the year was constructed already in September. With four new freshmen aboard the team, the plans of the 2019 season were drafted:

Accompanying our ambitions, we came up with a powerful theme for the new canoes: Greek gods. For the Dutch race, which would be helt in Den Bosch, four majestic inhabiants of Mount Olympus would be constructed: Ares, god of war, Tartarus, god of the underworld, Gaia, god of the earth and Zeus, the king of gods. Some of them would incoporate 3M-glassbubbles instead of expanded glass, as is visible in the construction report of 2019. Besides, a canoe would be constructed which focussed on the use of individual glass-fibres rather than our usual glass-fibre mats.

Besides the innovation on the concrete materials side, a new mold was constructed in order to have a new and smooth design for our canoes. Multiple trips were made to a polyester company in the west of the Netherlands, in order to establish the mold, together with a training canoe. This new training canoe has the exact same shape as our concrete canoes, so our training on open water is ever so more realistic to match-conditions.

After all the months of preparation, the weekend of 24, 25 and 26 May was finally there: the 2019 Dutch BetonKanoRace. The weekend started off with a setback. During transport Ares, the canoe with the individual glass-fibres, broke in two. After arrival in Den Bosch, is had been tried to fix this problem by using an engineers best friends: wood, PUR-foam and of course duct-tape. This turned out to be an amazing solution, since Ares managed to win the first race of the day on Saturday! As the day continued, it became clear that Zeus, with a tunderbolt on its side, was one of the best canoes on the water. Winning most of the series it participated it, it also managed to to win both the 100 metres for Men and the 100 metres Mix. 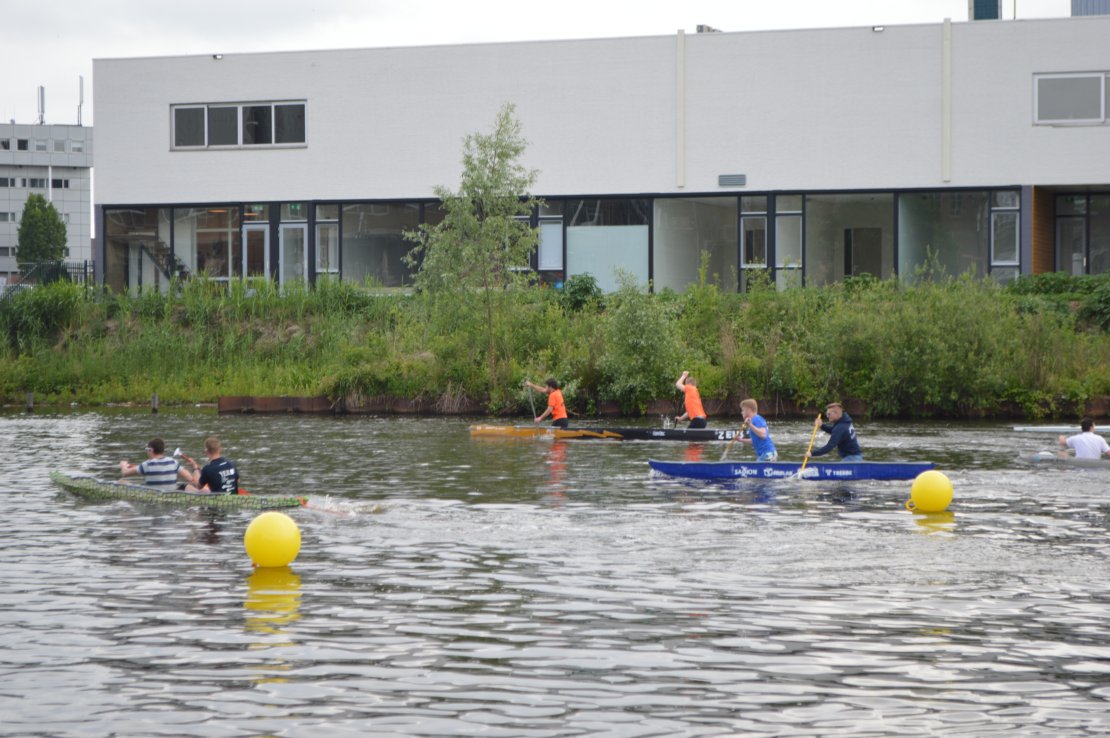 Unfortunately, all official 200 metre races were cancelled, however, a couple of our daredevils challenged the teams of Leipzig and Regensburg for a 200 metre race. A second place was achieved; a good result, but there is still room for improvement, which our canoeers are very well aware of. More training is planned, depart for Heilbronn (where this years' German race will take place) is scheduled and the canoes are being prepared. Goddess of love Aphrodite will be conquering your hearts and as a true goddess of victory Nikè will hopefully guide us to new heights in Heilbronn. We are expecting intense and exciting races against, amongst others, our friends of Leipzig, Dresden and Regensburg!

Even more photos of this race are available on the website of Study Association ConcepT here.