After last year’s somewhat disappointing results at the Concrete Canoe Challenge in Arnhem, the BetonBrouwers had to work very hard to come back as winners at the Dutch race in their home town Enschede this year. Months of meeting, training and pouring have been done to create the best canoes and canoeists and to show the power that the BetonBrouwers have in them. And it has worked.

In the months leading to the race, five canoes have been made. Four of them are meant to be the lightest and fasted possible, one of them to be very innovative. This year, the overreaching theme has been alcoholic beverages, leading to canoe names as Blue Kanocao, Grolsch Kano(n), Petrikanov, Likeuropees kampioen and Adtje Beton. The hard work of the committee, the pouring gang and the ‘Meshploeg’, has led to the promising outcome of all normal canoes weighing less than 60 kilos.

All ‘normal’ canoes indeed, because one canoe was slightly less normal. This year, in close cooperation with the ENCI, one canoe has been made of Ultra High Performance Concrete (UHPC). With enormous tensile and compression strengths, this unbreakable beast was in the race for the innovation award. After sealing some minor holes in the canoe, it has participated in the 100m men race, to show that it is a fully functioning canoe. However the award for the most innovative canoe has gone to KOers from Eindhoven, who have made a canoe from 3D printed concrete. We would like to congratulate them on this victory with their very inventive canoe. 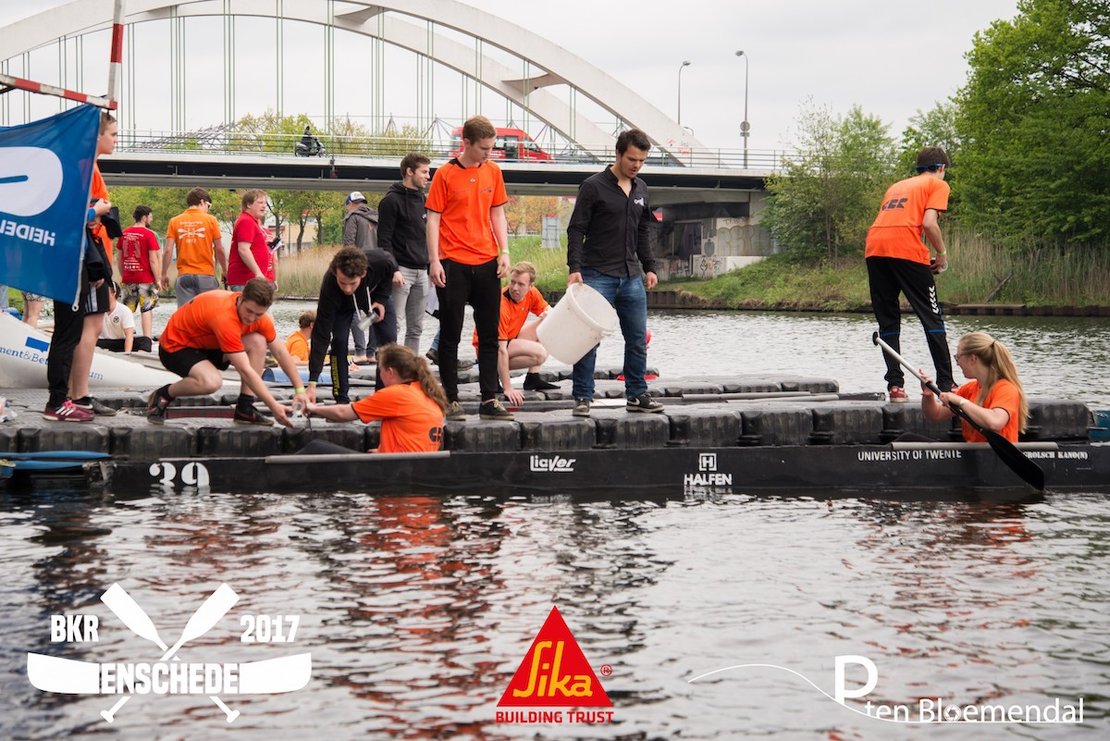 However, the most important part of the race for us is, you guessed it, the race. After some errors with the Grolsch Kano(n) canoe while creating and storing it, water came in increasingly fast. And, after still being able to participate in the 100 and 200 meter races, has been steered to the side in the 400 meter race to prevent it from sinking. The other two canoes that participated – Blue Kanocao and Murdock – did do very well in the races, leading to victories in the following five of the nine races: 100m women, 200m men, women and mixed, 400m women. The final prize that we won in the weekend was the award for best University, based on the overall scores in the races.

Other races have been won by OTH Regensburg and HTWK Leipzig and we would like to congratulate them on their victories. We would also like to thank all other participants for the very enjoyable weekend and their sportsmanship and sociability, which has made the weekend to be unforgettable.

The entertaining weekend would not have been possible without the help of all our sponsors, which have supported us in the construction of the canoes and which have even encouraged us from the waterside. Their support has really helped us in the process leading to the challenge and we are very thankful for their help.
Finally our special thanks go to the organisation committee of the concrete canoe challenge, who have facilitated us with everything we needed to enjoy the weekend. We have seen ourselves how much work has been done to organise the event and we really appreciate the efforts that have been made to make the weekend as amusing as possible.
We would like to see everyone back at the officious European Championship in Germany in June, which will be held in Cologne this year. Two of our canoes have been reserved to participate in this challenge, which will hopefully result in the same or an even more prosperous outcome as the Dutch challenge.

Even more photos of this race are available on the website of Study Association ConcepT here.