After the succesfull season of 2009, the start of the new study season in September was used to start on a new BetonBrouwers season as well. Now we had the confirmation that the design of the canoes was almost perfect, the BetonBrouwers decided to put effort in making the canoes even nicer, smoother and lighter by using all kinds of different concrete mixtures. Already in the previous year the decision was made to construct white canoes, which was a good desicion afterwards.

Because of the overwhelming victory in Roermond (and Essen) the BetonBrouwers were invited to put up a stand on the annual Dutch Concrete exibition day in Rotterdam. A lot of visitors and people out of the concrete industry found out the mysteries of making concrete canoes and where supprised by the nice boats from Twente. During the Concrete Day exibition we already were able to meet the team from Utrecht which was going to organize the Ducth Concrete Canoe event in June 2010.

While our ‘cornerstones’ Frank and Chiel were studying civil engineering aspects abroad (Trondheim, Norway resp. Prague, Chzech Republik) the committee slowly worked to the new canoes. In the first weeks of 2010 our main sponsor ENCI was visited to gain some insights in the new concrete mixtures which were going to be used in the new canoes. Remarkable was that marble was to be ‘in the mix’ of one canoe: polishing that boat would make the canoe shine like a star.

The mould from the previous year was refurbished and a car paint shop put a nice and smooth new layer of paint on the mould. From this point the canoes could be constructed. Almost every week a canoe rolled of the assembly line. Trainings were hard as ever and also canoeists from ConcepT had to put a lot of effort in paddling to work themselves through the training. On the eve of Thursday the 3rd of June the BetonBrouwers were ready to rock again! 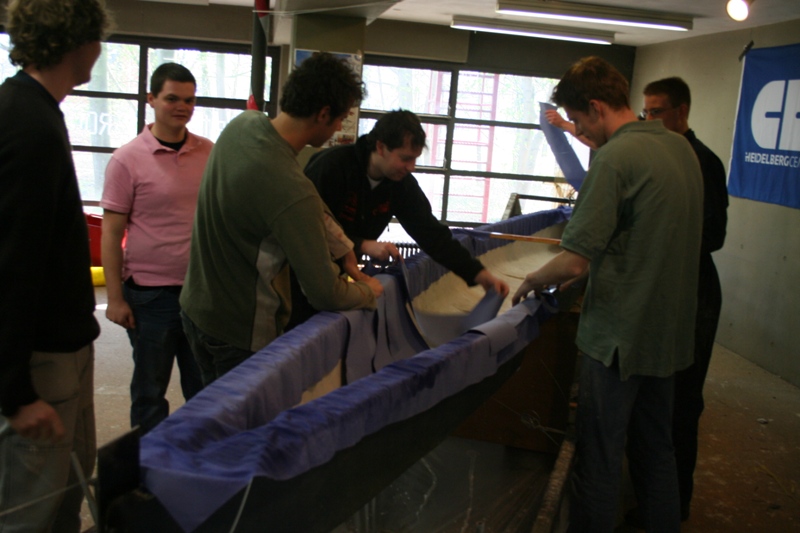 On the sunny morning of Friday the 4th of June the delegation from Twente searched their way to Utrecht. A camp site on the outskirts of Utrecht was used as base for the coming weekend. With a large army tent the BetonBrouwers base wasn’t to be overseen. During the examination of the canoes by the jury the canoes, the BetonBrouwers gained respect with the work they had done. The white canoes were the center of interest. The day was closed with a canoe trip over the town canals of Utrecht, the draw for the races of the next day and a party from hell with singing hero ‘Starkoo’.

The following day the races began early. Starting slowly, the races in the men and female disciplines were dominated by the white canoes from Twente. In the mixed raced the competition was fierce, though one duo was able to reach the semi-finals. In the men competition, our ‘canoe legends’ Frank and Sevrien did what they had to do: winning every race in de 200m an 400m sprint races. Even athletes from Prague weren’t able to stop the two. Also Casper and Chiel were able to reach the final, though only the 200m one. In de semi finals for the 400m their canoe was deliberatly crushed by the Czechs, which weren’t going to win the fair-play cup.

At the female competitions Nienke and Floor resp. Cindy and Leonie reached the final of the 400m. Both lady teams showed what they could and won the first and second price during the final run in the centre of Utrecht! Frank and Sevrien won the 200m and 400m (third year in a row = hattrick one) sprints overwhelming, while Chiel and Casper did a good job by winning the bronze medal on the 200m. 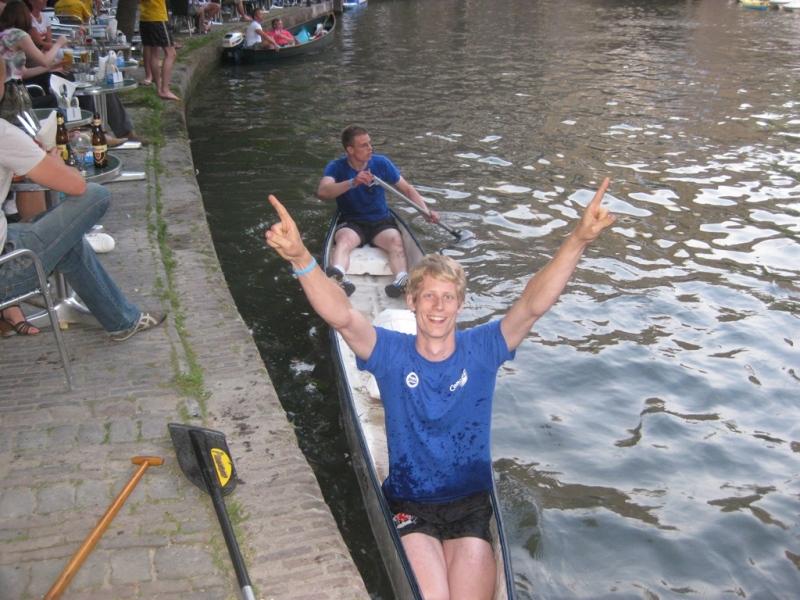 While the construction of the canoes from Twente was again not to be outclassed by other teams, the second hattrick came in sight and the construction price was won. The third hattrick was winning the overall-price. The success was complete and the party was set to go for the night! The performance of the BetonBrouwers was unique. Never in the history of the Dutch Concrete Canoe Challenge one team managed to win the overall price three years on a row.