After the Concrete canoe challenge of 2008, the BetonBrouwers were officially Dutch champion. Though we wanted even more; not only a good reputation in Holland but also abroad. The new challenge for 2009 had to be participating at the German BetonKanu-Regatta, which was to be held in Essen on the 19th and 20th june 2009. Besides that, we had to protect our title at the Dutch concrete canoe challenge in Roermond.

Thanks to the succes of the canoe challenge in 2008, two new team members could be introduced: Chiel and Hildermar were going to strengthen our team. Though we also said goodbye to Jeroen and Sander, who helped the team to the victory in 2008. A big difference with the two previous years was that 2009 should be the year of a completely new canoe design. Using special software, our construction team managed to design an optimal canoe. Together with a promovendus a nice concrete mixture was designed, with which we gained a weight reduction of almost 40%.

Together with the new canoe design, a big challenge occured: a new mould had to be made. After using an old canoe as mould in 2007 and 2008, this year we were going to use custom made specimen. Before actually making the mould, a 1:1 model of the canoe had to be made. After several hours hard working, a wooden model arose. On a sunny Saturday in March, a mould was created in Beek en Donk in the province of Noord Brabant. After a full day of work a very nice polyester mould was taken back to Twente. The actual canoe making could finally begin! 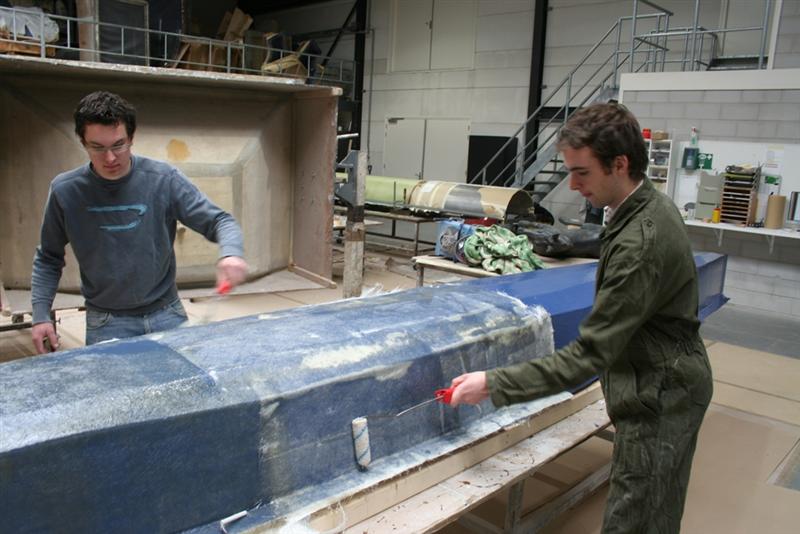 Constructing the canoes was succeeded without any large problems. As already figured out in advance, the new concept of using steel cables and synthetic mashes prooved out to be build in pretty easily. Building four new canoes took us about four weeks, after which hardening and finishing the canoes could be started. The nice orange canoes were finished with nice and catchy names and the steel cables in the top of the canoes were put under tension. We were ready to rock ‘n roll on the water.

On Friday the 5th of June, the BetonBrouwers transport to Roermond left Enschede. Thanks to a lot of effort in making nice and competitive strong canoes and training in canoeing the whole year round, we were confident in gaining succes the coming weekend. After arriving in Roermond, it appeared that our French competitors were not present during this Concrete Canoe Challenges. Nevertheless some competition was expected from two German teams. Together with a team from Leeuwarden, they were considered to be our biggest competitors during the races. The next morning, canoe racing began!

During the short distance (200 meter) our experienced canoe team, Frank and Sevrien, prooved again to be best of the best. Without any problems, they reached the final round and winning it very easy. Though, they were not the only ones to race with succes. Our mixed and lady teams showed that they could paddle as well. This resulted in several prices, including one first price at the mixed teams. 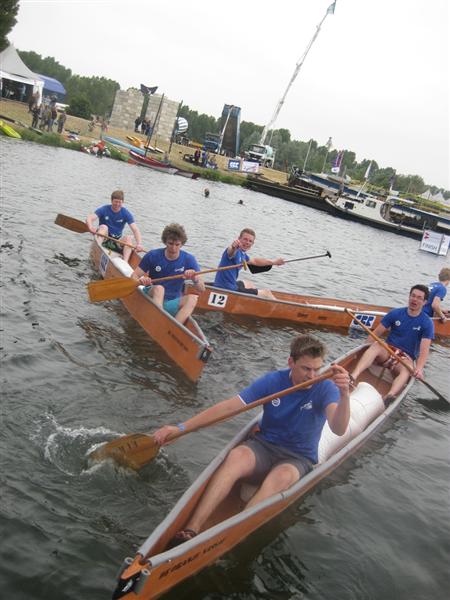 After lunch, the BetonBrouwers continuoud with gaining prices. The ladies revenged themselves for the second place in the 200 meter runs and managed to finish first at the 400 m final. Besides that, all of the ConcepT-men couples saw themselves starting in the 400 m final. Three canoes of ConcepT and one boat from Dresden were going to fight out who was going to win prices. In fact our three canoes finished first, second and third (even with a damaged canoe), the succes was complete! In total 10 prices were gained with racing (4x first price, 4x second price, 2 times thrid price). Besides that, the new canoe design was rewarded with two prices. The new design was rewarded with the first price on the subject construction and second in innovation. Of course the overall price was also going to the BetonBrouwers. Not less than 13 prices (!) were taken back towards Enschede. The results were devastating.

Supported with our succes, our convidence rose. As a matter of fact, this was only the first of two races and the real battles were yet to come. After two weeks, we left Enschede again. This time, Essen (D) was our destination. While driving our vehicle over the camp site, located in the vicinity of the race territory, the Germans did it in their pants of the entrace of the Dutch. The next day was assigned to show the canoes to the different jury’s and other interested people. Most of the eastern neighbours were sceptical about our design: we might win on the straight, but a canoe of nearly 6m long could never make the turns. Well, we proved them wrong that afternoon by giving a little demonstration, the shock was complete. It appeared that as for speed, the canoes from Twente had a lot of chance to make it to the final rounds. During the evening that followed, all of the Dutch present in Essen showed that we are not only good in building canoes, but also in drinking beer. Though a lot of this holy drink couldn’t be drunk because of the races of the next day.

The next moring the races began early to make sure all of the canoes could sprint for the finish. During the qualification rounds, it was clear that our succes in Holland was not exclusive; every canoe in the German races fought themselves to the final rounds. Unfortunately, two of the men teams were not good enough to go beyound the quarter finals. Frank and Sevrien however won every (final) round with ease and were the first couple to qualify for the final. Even two ladies managed to paddle themselves to their final. Another lady team was stopped in the semi-final and eventually took the fifth place of the tournament. Unfortunately the ladies in the finals weren’t able to paddle themselves to one of the first three places and finished fourth. A very good result! 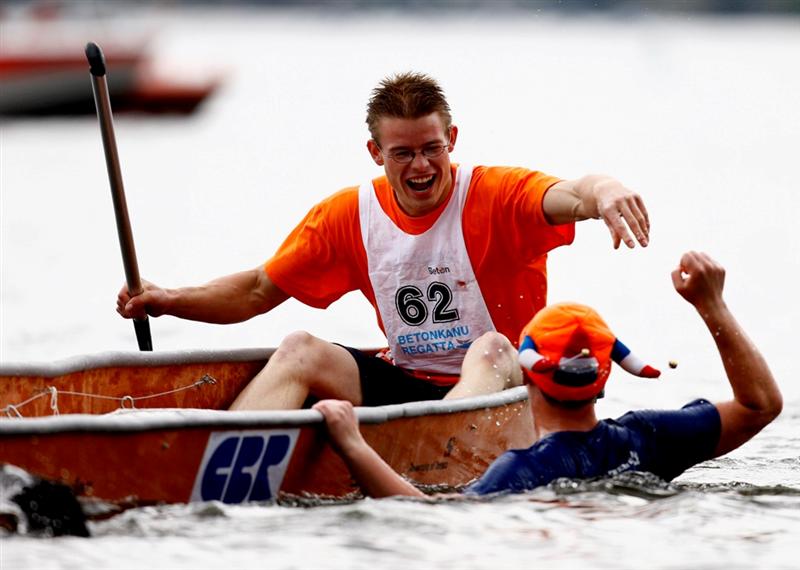 After the ladies final, the waiting started for the mens final. Although starting with a lot of convidence, the Dutch felt the pressure. The lighting start of Frank and Sevrien was again determining the course of the race. After only 50 meters, ‘Das Phantom’ lay ahead and was storming for the finish. The two top canoeists from Twente eventyually won the final overwhelming. Our succes was complete and was rewarded with a very nice first price! The Germans were defeated. Because they had to be remembered a Dutch team won the race, the whole night some nice songs were sung over the camp site. The Germans had nothing to tell anymore that night.