After being succesfull on the concrete canoe challenge of 2007, we agreed that this story of succes had to be continued. With the help of a briliant marketing campaign, we managed to welcome three new team members. Together with Study Associasion ConcepT, a plan was developed in which a new constructive department had to be set up. In the future, the BetonBrouwers weren’t responsible for only making concrete canoes anymore, but also for designing bridges or developing new kinds of concrete as a part of student competitions. The core activity however remained designing and building new canoes, in which we were getting very good at.

For all the work we had on making the mould the year before, we decided that for 2008 the mould of 2007 was to be used again. But how to make better canoes with the same mould? The first aspect was developing a new kind of light and flexible concrete. Besides that, we were going to use another concept of prestressing the concrete and making the canoes as thin as possible. Financial problems were no more because of a great sponsor, we had enough manpower, canoe training was still an important activity of the week and we were all highly motivated: nothing could stop the BetonBrouwers anymore.

The road to Delft 2008 wasn’t as easy as we thought though. Making the first of three new canoes took us two full days. Although the new concept of prestressing the concrete was developed to win some time, making the first canoe took us almost as much time as making two canoes with the old concept. Though, giving the canoes a nice colour with special pigments was succeeded. After evaluating the construction process of our first 2008-canoe, we managed to smoothen the process and two new canoes were created in a very short period of time. The three boats were named: Veni, Vidi and Vici. These famoes words of Roman Julius Ceasar (I came, I saw and I conquered) were going to very well decribe our canoe challenge exprierience in Delft. 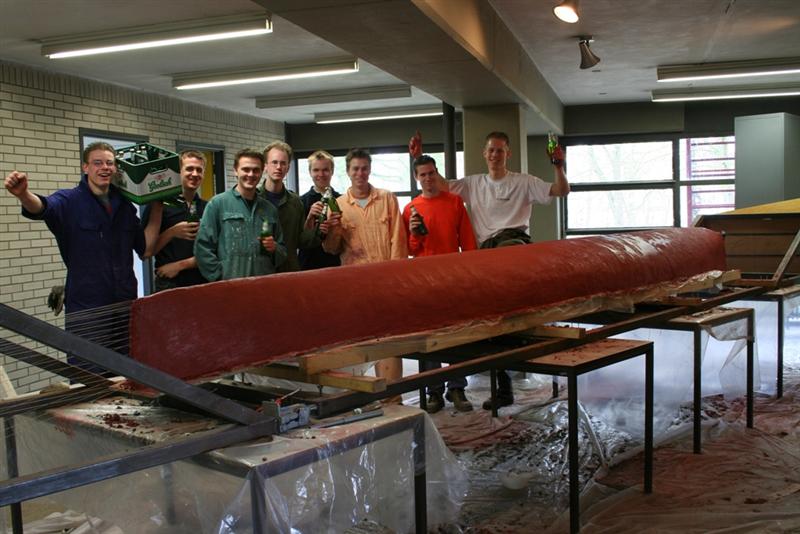 On the rainy morning of Friday the 16th May, our canoe transporter was reporting himself at the University Twente. A large Volvo truck was arranged to bring the three masterpieces of engineering from Twente to Delft. The whole trip from Enschede to Delft was driven in rain; at the time the BetonBrouwers arrived in Delft, the sun started to shine. The odds were not against us this time. After showing the canoes in the narrow canals of the old city of Delft and building a party, night fell. The day after, again hell was unleashed.

Almost a whole year of work took us to 15 May 2008. On the water of the ‘Delfste Hout’, it all had to be done; it was the day of truth. Frank Aarns and Sevrien Ferrée, the top canoeist of Twente, made it to the finals at the 200 meter sprint. The teams in the other divisons, mixed and ladies only, were less fortunate. A French team from Le Bourges was considered to be our only competitor. Because the 200m final was sabotaged by another team, the French unfortunately won the race. 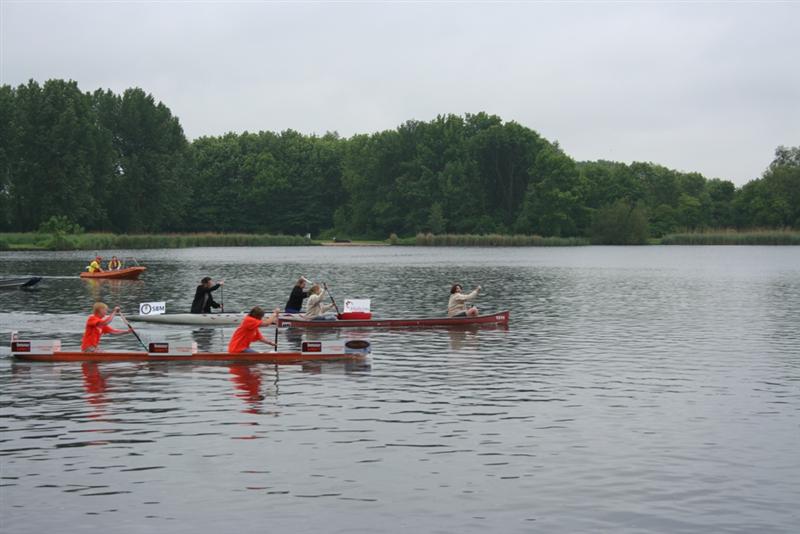 By having a great lunch, organized by our sponsor, we regained strength in our muscles and minds and we focused on the 400 meter races. Besides our men, the ladies performed very well on the 400 meter distance. They made it to the finals and actually won the race. Becuase the organisation of the race couldn’t another win by the University of Twente, the ladies were disqualified for turning countre clockwise at the buoy. The men also won the race; fortunately this was approved by the jury. In the semi-finals the men already showed that they could beat the French and in the final they did it again.

Because the jury was very pleased with our canoes and our result on the tournament, they decided to call ConcepT the overall winner of the Concrete Canoe Challenge 2009.  Our goals were achieved and the succes was complete. We came, we saw and we kicked ass! Because of this great succes, new candidates for particpating on the BetonBrouwers were easily found. Together with the rookies, a new plan was made for 2009. A complete new design had to be made and new concrete had to be developed. Now the road was open for the BetonKanu-Regatta in Essen (D) and the Dutch Concrete Canoe Challenge in Roermond. Although a lot of effort had to be put in the canoes before we could actually race with them, there was (and still is) believe in new success in 2009!