The first generations of alumni may still remember him, but for many people their first association with M.P. Breedveld (1912–1997) will be the room in the Waaier building that bears his name – an honour not granted to just anyone.

Marinus Pieter Breedveld (1912-1997) was born in Hillegom and studied Electrical Engineering at the Technical College of Delft (later Delft University of Technology). From 1948 to 1952, he was the Head of Technical Services at Djawatan Radio Rebublik Indonesia, and he would later be appointed lecturer at the University of Bandung and in Delft.

When construction began on Technische Hogeschool Twente (‘Twente Technical College’) in the 1960s, a key priority was to appoint core lecturers to the various departments. That was a very important task, as these heads of department would determine the course of teaching and research at the university. Delft Technical College got suspicious, afraid that their professors were going to desert to the competition – and their fears were not unfounded, as three professors from Delft showed an interest in moving to Twente: Van Hasselt, Vlugter and Breedveld. These academics would become the heads of department for, respectively, Mechanical Engineering, Chemical Engineering and Electrical Engineering.

Because the prospective department chairs didn’t want to leave their graduating class in Delft high and dry, and because they didn’t want to deal with an even bigger blow to their former institute by taking all their Delft students with them to Twente, a compromise was reached: some fourth-year students from Delft would transfer to Enschede and study there for six months or so, at the end of which time they would receive their diploma from Twente Technical College. So the first diplomas from Twente Technical College were actually awarded to graduates who had completed almost all their studies in Delft!

As the first head of department/dean of the faculty of Electrical Engineering (known today as EWI/EEMCS), Breedveld’s role in shaping the faculty was of the utmost importance. He didn’t favour his own department, conscientiously building up almost all the initial departments. A colleague described him as ‘an electrotechnical engineer from head to toe, not famous among academics in a single specific field, but well known for his vision, which often reflected his philosophy’.

Breedveld encouraged colleagues to seek out ways to apply information technology to biomedical engineering, especially in neurology. The original structure of Breedveld’s initiative can still be seen in the teaching and research themes of the departments, which are still going strong today.

In 1966, Breedveld introduced the idea of the ‘white engineer’: he compared engineering and technology with a colour triangle in which mixing red, green and blue produces white. Translated into his field, the idea was that engineering and technology were created from the right mix of three ingredients: energy, matter and information. Breedveld believed Technische Hogeschool Twente should train ‘white engineers’ familiar with all three of these areas. A very ‘High Tech, Human Touch’ approach!

The broad support Breedveld’s vision enjoyed meant that that vision would have a big impact on teaching at Twente Technical College, so it makes sense that a lecture hall is named after him. Since the M.P. Breedveld Hall is used for inaugural lectures, the influential Professor Breedveld is still having an impact on new academics at the start of their careers. 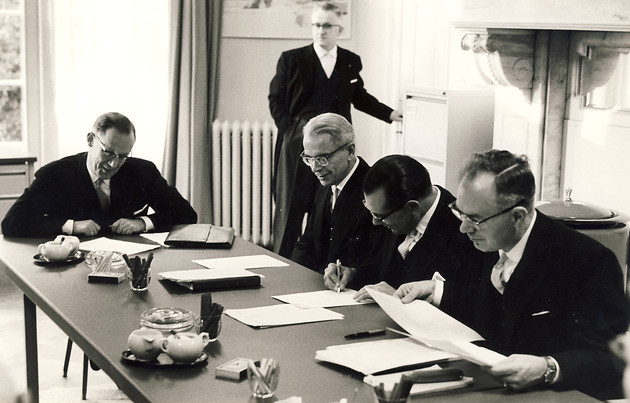