In the dark of the night between 11 and 12 April 1974, the face of the campus changed forever. The change happened literally overnight, and there was no going back: Het Ding (‘The Thing’) had arrived. From its appearance as if from nowhere one spring night, this work of art has evolved into a symbol.

For decades, the identity of the pranksters who had installed Het Ding remained a mystery. Still – although no one had asked to have a gigantic work of art built right next to the main entrance – the campus embraced its new foundling, and the university took on the responsibility for its maintenance.

Not until 2013 was it revealed that Het Ding had been designed by a group of five students, led by Jaap Hos and Jasper Latté, who had worked on their plan in secret for a full year. The project cost next to nothing; the businesses they approached to ask for materials were happy to join in the escapade. The ‘artists’ built their creation out of discarded telephone poles, contributed by the national postal service, and high-tension steel cables.

In a 2013 interview in the alumni magazine, Hos explained that by the end a lot of people were in on the plot – including the man who would later become rector magnificus, Wiebe Draijer. ‘We prepared the poles in the hall in his department. We made up a story about building houses on stilts for third-world countries.’

Het Ding is made up of six poles that seem to float unsupported, while the steel cables keep them balanced. Together they form a 20-sided shape constructed from triangles: 14 isosceles and six equilateral. Hos and Latté based their creation on a model by 20th-century American inventor and architect Richard Buckminster Fuller, who made similar use of push and pull forces. The assembly of The Thing was planned down to the millimetre and carried out by hand, using ladders, in the wee small hours of 12 April 1974. A good relationship with the security staff – and a lot of coffee and biscuits – made the secret construction possible.

Some time later, it became clear that the telephone poles had been allowed to get into a sorry state and the university authorities decided to dismantle Het Ding. Its creators, who were still anonymous at the time, had to act. As Hof told the alumni magazine, ‘We got a 70-year-old to write a letter pretending he was a founder of the Directorate-General for Public Works and Water Management, and that he had gone for a walk around the campus and was concerned about the technical state of The Thing: it was in need of maintenance.’

The ruse worked. Apparently impressed by the letter, the university authorities opted to repair Het Ding instead of taking it apart, and the poles were replaced. Het Ding has stood since 1974 as a symbol of the freedom, creativity and activism of the students of the University of Twente. 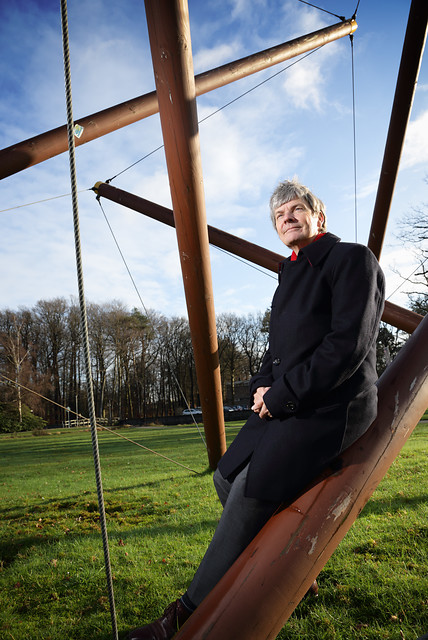