2010 saw the publication of Peter Buwalda’s debut novel, Bonita Avenue, that went on to become a huge bestseller. But what does a novel have to do with the University of Twente?

It’s 2006. Peter Buwalda is working as a journalist for a few different magazines and loves literature, devouring book after book. One day he thinks to himself, ‘I could do this better’, and starts writing his debut novel. The book, Bonita Avenue, is a massive hit, selling 350,000 copies and winning Buwalda both the Academia Literature Prize and the Anton Wachter Prize.

Peter Buwalda (1971) studied Dutch at Utrecht University, but after he graduated he realized he wasn’t finished with student life just yet. He decided to go back to university and took on the job of editor at UT Nieuws (newspaper of University of Twente). He managed to extend his time at university by four years, from 1998 to 2002, even living on campus. ‘I was like Tintin on campus,’ he said to UT Nieuws  following the publication of his book. ‘I went to parties at student clubs and wrote about them.’

Buwalda followed up his campus adventure by spending a few years as a journalist, until in 2006 he took the plunge and shut himself away to concentrate all his energies on his debut novel. For two years he wrote solidly, seven days a week. Because he drew on his experiences on campus to add flavour to his writing, the University of Twente features prominently in the book. Several characters bear a striking resemblance to real people from that time, including rector magnificus Frans van Vught and the chief editor of UT Nieuws at the time, Bert Groenman. The firework disaster finds its way into the book, as do some landmarks any alumnus will recognize straight away: the Vrijhof, containing ‘the office of chief editor Blaauwbroek of Tubantia Weekly’, the ‘dark bowels’ of the Bastille and the sports centre where rector Sigerius takes on students on the judo mat.

Asked by UT Nieuws why Bonita Avenue is partly set on campus, Buwalda answered: ‘My story needed a father with a certain status, and I was already planning for him to have children to bring him low. But he needed a little something extra. So I made him a rector magnificus who is about to become Minister of Education. I could draw on the city of Utrecht, where I studied Dutch, and on Twente. Twente holds a special place in my heart – I have fond memories of the campus. I also wanted a different background from most Dutch novels, that are set in Amsterdam.’

In honour of Buwalda’s success and of his connection with the university, on 29 March 2012 then-rector Ed Brinksma unveiled Bonita Avenue on campus. Buwalda gave a lecture to mark the occasion, after which he was personally presented with the street sign. You can even take a guided tour around campus, visiting all the key places featured in the book. 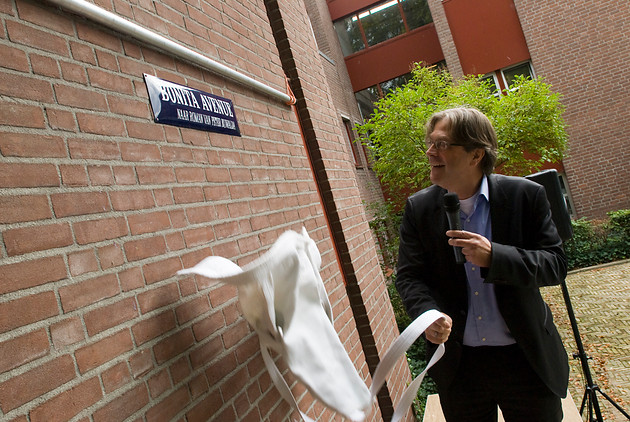