When thinking about the UT, you think about… study associations. When the first class started in September 1964, there were no study associations yet. The preparation committee, a club of industrialists and managers that was founded in 1961, wasn’t fond of the idea of a student clubhouse on campus. However, they did want to stimulate the establishment of sports, culture and study associations.

More than six months later, on the 29th of March 1965,  the first study association was set up by students of the study Chemical Technology: the ‘Chemical and Technical Student Society’. Later that year other new study associations followed. This were the ‘Mechanical Engineering Study Society Isaac Newton’ and the ‘Electrotechnical Study Association Scintilla’, both founded on the 9th of September 1965. The Chemical and Technical Student Society however decided to change its name in 1966, into a more appealing one. Therefore they started a competition for a new name, which received creative ideas like ‘Lavoiser’, ‘Krater’ and ‘Lapschwanz’. The winner became ‘Alembic’, the name of an old-fashioned still. 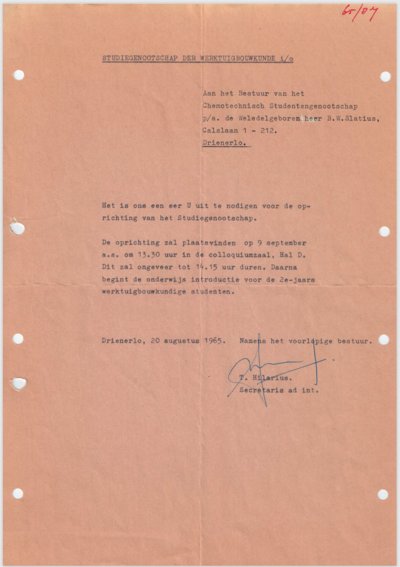 After their establishment, the three study associations started organizing flat parties together, to break through the isolation on campus. Besides that they also organized the sale of dictations and books and they organized study trips. During the years more and more study associations were established and nowadays there are 21!

The Canon is always developing and open for discussion. Do you miss a certain event or person?

On the 16th of November 1979 the fountain in front of the building of Chemical Technology (later ‘Langezijds’, now the ‘Gallery’) was officially revealed. Study Association Alembic had thrown 30 liters of detergent into the fountain, which produced a lot of foam. The fountain is unfortunately not present anymore, but lies in storage.

The information in this article is based on information from the book ‘Van Landgoed tot Kenniscampus’.