Morality is older than religion

On the 8th of December 2014, a world renowned biologist Frans de Waal presented a lecture organized by Studium Generale. Professor De Waal talked about his research, which reveals that morality was not invented by religion or social rules, but was produced by evolution. ´Morality is a product of nature and it existed long before God, ´ says De Waal.

Frans de Waal is a Dutch behavioral biologist, who is famous for his work on primate behavior. He has written several books, in which he points to parallels between human and ape behavior. De Waal´s work shows that moral rules, such as empathy or sense of fairness, come naturally to many different animals and especially primates, including humans. 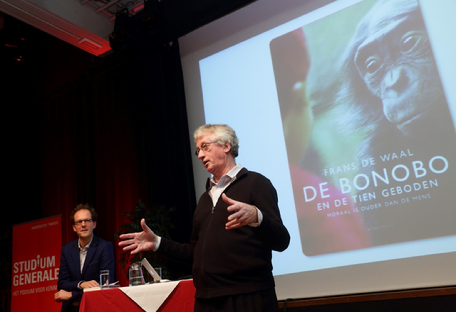 ´There has been an implication that morality belongs only to religion, not to evolutionary theory. That morality was given to humans by God or that it was created by people themselves. I believe that morality is a natural product of evolution, just like Darwin thought, ´ began De Waal. During his speech, he explained that human behavior is very similar to the one of chimps and bonobos. In fact, based on the DNA, chimp is closer to a human than it is to a gorilla!

Just like us, apes (and many other animas) reconcile after conflicts to make sure they keep their society together. Apes also naturally experience empathy; they understand and share feelings of another. ´Bonobos console each other – they embrace others who are in distress. They also show targeted helping, which means they understand if their companion is in need. They help injured individuals or give each other water, ´ said De Waal. It seems that apes and other animals, such as elephants, understand reciprocity and the need to cooperate.

To feel empathy, you need to distinguish from your own feelings and feelings of others, to realize that you are an individual. Apes seem to be capable of that. De Waal mentioned that apes even recognize themselves in a mirror: ´Apes use mirrors to inspect themselves, to check their mouths, for instance. What only female chimps do, though, is checking their behinds.´ That is certainly an interesting parallel between us and chimps.

Animals care about others

Apart from being busy with admiring themselves in mirrors, apes are also very pro-social animals, who display a sense of fairness. ´Based on experiments, we can say that monkeys and apes prefer options that benefit not only them, but also the members of their group. If they can choose between being selfish or benefiting everybody, they go for the second option, ´ said De Waal. Animals care about others - mammals form attachments to individuals around them and are sad when they die. Mammals even display physiological reactions when they feel sad.

Morality given by biology

All of the above examples show that moral principals come out of very basic emotions. ´Morality comes from ancient brain areas. It is not just a written set of rules, ´stated De Waal. ´There is a continuity with other primates, which shows that basic moral tendencies are given by biology and morality is therefore older than religion.´