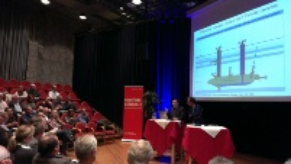 There are dozens of unstable salt caverns in the region of Twente and if they collapse, many of them might form sinkholes. To prevent this from happening, the salt caverns should be filled. With what? Possibly with toxic waste, claim local companies. To learn more about this option and the issue in general, Studium Generale organized a lecture "Mind the Gap" where the topic was discussed by experts, involved companies and politicians.

Salt caverns near Enschede and Hengelo need to be stabilized, that is for sure. In 1991, one of them even led to the formation of a 4.5 meters deep crater in Hengelo. Now the question is: How to stop this from happening again? Companies AkzoNobel and Twence suggest that the caverns should be filled with industrial waste, such as fly ashes. Yesterday´s Studium Generale lecture discussed how safe this method is and what its drawbacks are.

'Fly ashes are one of the residues from waste incinerators. They contain a high concentration of heavy metals, which makes them toxic,' explained the first speaker of the evening, Roland Weber. 'Large volumes of these fly ashes are suggested to be disposed in salt caverns in Twente in order to stabilize these caverns. That would mean about 525.000 m3 of hazardous material per cavern.'

Weber, who is a chemist and an environmental consultant from Germany, pointed out that possible leakage pathways need to be assessed before this plan would be set into motion, because processes in ash management could result in exposure. But how high is the risk of exposing the toxic sludge to the environment outside the salt caverns?

'We are constantly doing tests and so far no material has been able to penetrate the double piping we use,' answered Tobias Pinkse from AkzoNobel, one of the companies that are deeply involved in the topic and work on possibly solving the issue of unstable caverns by using waste.

Robert Hack, a geologist from ITC, took the stage next to explain why salt caverns represent a potential risk of sinkholes: 'Salt is deposited in crystallized structure, which is not compacted and often lighter than the materials above it. Therefore it is easy for it to deform and form domes. If the dome fails due to tangential or tensile stresses, its sides or roof will break. When the roof of the cavern collapses, the cavern migrates upwards. If we fill it up, the migration stops. If we do not, it reaches the surface and creates a sinkhole.'

You might wonder why the caverns can´t be simply filled with something clean, such as water. 'The cavern can´t be filled with only fluid, because that wouldn´t stop the rocks from the roof from falling down and the cavern would still migrate. You need some hard material for this purpose,' clarified Marinus den Hartogh from AkzoNobel. 'However, you don´t need to fill up 100% of the cavern.'

So are there risks associated with filling up the salt caverns? 'Zero risk is impossible. Uncertainty is always there,' thinks Ibo van de Poel, a philosopher focusing on ethics and technology, who also spoke at the event. 'When we consider a new technology, we try to determine its risks and decide whether they are acceptable. But we can never be sure about the risks. Some affects become known only after the technology is introduced, so we shouldn´t ask if the technology is safe, but under what conditions do we keep experimenting with it? We need to recognize that it is always an uncertain situation.'

'We constantly focus on uncertainties,' reacted Pinkse, the project manager at AkzoNobel. 'We look for them and inform our stakeholders about the real situation. And I tell all my researchers: search for a definite reason why not to do this.'

The decision on what to do about the unstable caverns in Twente has not yet been made. Should they really be filled with toxic substance? Politicians in the audience, who included representatives from the Enschede city council, Hengelo and Overijssel province government, agreed that they couldn´t be certain this was indeed the best solution to the problem. They all stated this option only represented the vision of AkzoNobel and Twence, and therefore all other possibilities need to be considered before a decision is made.