A public debate with all UT parties running for a seat on the University Council took place today at the O&O square. The discussion, organized by U-Today and Studium Generale, covered various topics, including language policy, TOM and work pressure. 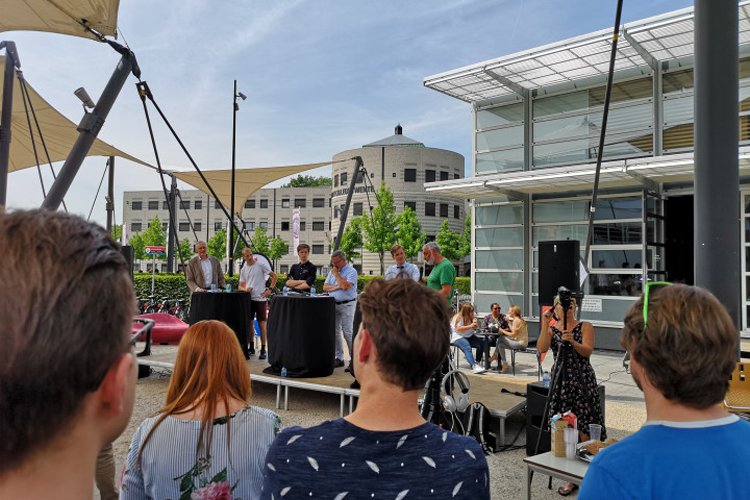 The elections for the University Council 2018 began this morning. The debate offered an opportunity to the participating parties to share their vision for the future of the UT. The following candidates represented their respective parties at the event:

‘Participation does not make a difference’

All the candidates offered a very similar response to the first statement that ‘Participation does not make a difference’, pointing out that the voice of students is important. ‘You have the right to initiate new ideas. You can influence things that really matter to us as students,’ said Zijlstra.

‘Dutch students have the right to study in Dutch’

The second point of discussion inspired more opposing statements. Some, such as Leon van der Neut, believed that offering education in English is the most reasonable course of action: ‘Knowledge economy of the Netherlands is international, it’s dependant on other countries. If the market students are entering is English, the studies should also be in English.’

Dik Schipper gave a very different answer: ‘I think they do have the right. Especially in the bachelor’s programs. If you want to teach English in master programs, it’s fine. But in the bachelor, it’s about the basics. About the core and concepts. Sure, it’s suitable for some studies to be taught in English, but that doesn’t apply to every study program. We don’t have to follow every direction blindly, so why not turn everything back to Dutch?’

Other participants pointed out that it’s not really up to the University Council to answer the question. Wormeester suggested the issue should be dealt with on a national level and that lawmakers should offer more definite guidance. Zijlstra continued on a similar note: ‘We have nothing to say on the matter. In the end, it’s up to the programs to decide. We need to know where our borders are.’ Gert Brinkman disagreed with that comment and noted: ‘University is primarily about knowledge transfer and this transfer is always best if done in one’s native language. Let’s hope politics don’t decide this for us, because it could mean real problems for the programs. Internationalization could turn against the university.’

According to all the candidates, many people at the UT deal with high workload and study pressure. If it comes to employees, Wormeester said the issue is caused by the lack of staff: ‘There is a shortage of scientific staff. We are understaffed by about 10%, yet somebody needs to do the work.’

‘I see it within our party consisting of both students and employees that work pressure takes its toll,’ agreed Witmond. ‘You see teachers dumbing down their tests, so more students pass. But as a university, it’s our mission to deliver engineers to society that can actually do something. So I would rather not speak about human capital but about human potential that I see is being wasted.’

Van der Neut added that the issue applies to students as well: ‘As students we also experience high workload. It’s often related to the definition of EC’s.’

Through that remark the debate naturally shifted to the next point of discussion, the infamous ’15 EC’s or nothing’ rule of the Twente Education Model. All candidates confirmed they considered this a big problem. ‘It causes a lot of extra stress,’ said Zijlstra. ‘We need to focus on the source of it and offer help to the students. For example, scheduling three tests for one week simply won’t work.’

After both PvdUT representatives took the opportunity to remind everyone that their party has been against the TOM setup since the beginning, other candidates concluded that it would be best to focus on the future. ‘Let’s try to cooperate and be constructive,’ said Zijlstra. ‘We all want the best possible university and we want the best for its students and employees.’