Luuk Spreeuwers (EEMCS) is the module coordinator for module 2 in Electrical Engineering. He came up with a clever idea to allow students to learn from their tests: review sessions. Erik Faber (EEMCS), module coordinator of module 5 in Creative Technology last year and this year involved as a teacher, has also been using these sessions. Both of them are very excited about the method. Review sessions are about two principles: peer learning, and learning from tests. 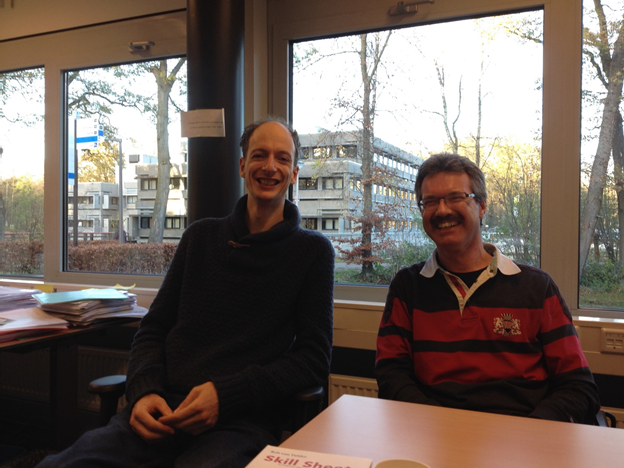 Review as a prerequisite for a resit

The review sessions were Luuk’s idea. He started implementing them about four years ago, during the TOM pilot in EE. This module features several interim tests. Whenever students fail an interim test, they are allowed to take a resit - provided they attended the review session. At the start of the review meeting, the students receive their original tests. They analyse and discuss the mistakes they made in groups, after which they write a short report about their findings individually. This report contains an analysis of the mistakes made, as well as a new, correct solution to the problems. At the end of the meeting, the students hand in their reports to the lecturer, who checks the assignments immediately. The lecturer checks off the review, and the student is allowed to take the resit. “In principle, this resit is their final test, consisting of ten separate tests,” Luuk explains. During this final test, the students do not have to retake any of the tests they already passed. “It boils down to students being able to earn extra time with these tests.” This is why students are keen on taking the interim tests.

Even though the review sessions are a prerequisite for being allowed to take the resit, students who passed their interim tests are free to attend as well. This will net them a bonus point. “The review sessions are rife with potential,” says Erik. “A previous test is an excellent learning experience.” Luuk: “Even for students who have already passed the interim test.” This is exactly why Luuk came up with the review sessions. “Although they have a right to do so, few students actually use the opportunity to review their own tests,” he says. “This is in spite of the fact that feedback is the most important learning tool,” Erik adds. Last year marked the first time the review sessions were held during his module, and the module team was pleasantly surprised about the students’ level of enthusiasm in explaining things to each other. “They were having a lot of fun,” he adds. “And they were very excited about how much you can learn from your own mistakes. The best thing about it is that you do not scold people for their mistakes, and instead show them that making mistakes is a learning opportunity,” says Erik. As you can discuss your mistakes with peers in a low-profile setting, you can review them with an open mind.

Luuk organizes two pairs of review sessions in his module; one in week 4, and another in week 8. Several tests are reviewed during a single session. Erik’s module features a test every Monday, with the review taking place on Friday. Luuk explains that, depending on the difficulty of a test, around 25% to 75% of the students attend any given review session. “This means about 30 to 50 students are present during a session.” The students’ reports must be checked immediately, meaning the reports should be brief and concise. “No more than one or two pages at the very most,” says Luuk. “And a report is rejected if it is not written neatly, or it would take forever to get through.”

Both Luuk and Erik believe it is essential to be very clear about what the students need to hand in exactly, as well as the rules that apply. For example, allowing the students to call their marks into question and to ask for clarification prior to the review. Once the review session has started, they can no longer do so. “And they are not allowed to write on the original test,” Luuk adds. The logistics should also be considered carefully beforehand. “Prior to the review sessions, we create folders that contain the original test, and the students have to add their reports to said folder.” These folders are arranged alphabetically so the students can easily find their own. “This is something we have had to learn the hard way. Finding the right exams was incredibly time consuming, and the students would much rather spend that time on the actual review.” This should come as no surprise, because that is exactly what students learn the most from. “There is a good reason why the review sessions are this popular!”