Hil Meijer has been a lecturer at the UT since 2007. Within MIRA, he researches how to understand clinical signals, especially concerning epilepsy. He has always been a member of the Department of Applied Analysis and lectured Ordinary Differential Equations. When designing module 6, Hil considers whether he is to stick to the existing subject or to the topic for his module 6. He chooses the latter, with success! 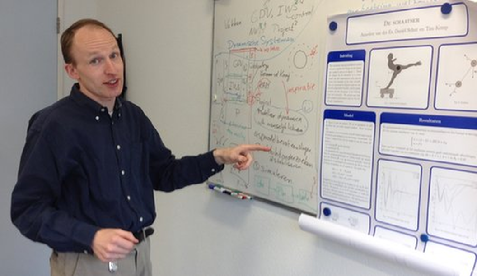 Dynamics of the human body

Hil indicates that he wants a project on a topic that the students can easily imagine and in which they can apply ordinary differential equations. He has therefore ended up modelling the dynamics of the human body, which - not entirely by accident – is the subject his research covers. "It has taken me a while to get my way", quips Hil. However, the module is just right; the other subjects of Numerical Mathematics and Systems Theory fit in well. "You can see the human body as an inverted pendulum. Therefore, a model quite quickly involves a differential equation. It is unstable, so you have to adjust it. If you want to simulate this, you need numerical mathematics. Without fellow lecturers Bernard Geurts and Gjerrit Meinsma and guest lectures by Herman van der Kooij and Geert Folkertsma, this module cannot succeed."

Students had to choose the topic of their project themselves, which they found exciting. "Of course the students sighed that they had never modelled before, or that they found it annoying that it was not known what the answer should be." Hil threw them into the deep end, but did give them the confidence that they could do this. "Getting cold feet is part of this; it happens to you too as a researcher."

The final projects are, for example, about walking on a tightrope or walking patterns. One group has been able to model that you walk more slowly when your muscles are stiffer due to muscle pain or age. "That sounds like a truism, but try to model that." Yes, Hil is certainly proud of his students. Pointing to a number of research posters made by students: "They have really done a good job." Laughing, he adds: "I was secretly hoping for rehabilitation technology-related research. It is not quite that yet... Well, you should always have something to dream about for the years to come."

The students are very satisfied with this module. The formula for success is ‘the peace and quiet’. "There is no running from deadline to deadline, but only two comprehensive tests covering all the material up until then." Based on his experience with the BMT pilot, Hil has deliberately opted for few tests and few mandatory meetings. His experience is that students really get to work on their own. If they know they have to complete something and there is nothing else on the timetable, they take the initiative to sit down together. You do not have to do everything for them."

The subjects mainly focus on ability, but mathematics is also about understanding. Hil’s team of lecturers have a selected topics method for this: the Sum of the Week. Students are invited to stand in front of the blackboard to work out a sum. If you do well, you get a bonus point. " I am playing with the idea of doing this in the form of an essay next year. Students are then able to explain one aspect of the project. This way, you immediately have an individual test opportunity within the project, and the relationship between the theory and the project is even stronger.”

Hil would like to make the project part even bigger in the future, so that he does not have to give as many lectures. "Because as a lecturer, I should not have to show what I can do. Students can also read the book." Nevertheless, for the time being, he is not going to make any adjustments. Being a coordinator is extremely labour intensive. It is a nice module, but until October Hil does not want to hear any more about it...