To go beyond standard multilayer wavefront correcting optics for the XUV wavelength range and develop systems that allow compensation of the wavefront aberrations as well as tuning of the reflectivity. 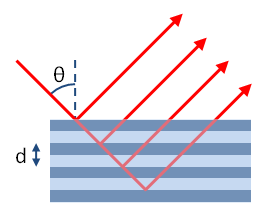 Current lithography systems are at their resolution limit (32 nm), helped by ingenious technological solutions, such as immersion lenses and double patterning. In order to further increase the resolution (22 nm, 16 nm and beyond) it is planned to reduce the operational wavelength from 193 nm to 13.5 nm. However, shifting the wavelength to this extreme ultraviolet (EUV) requires diffferent optics. Refractive indices of the materials are almost equal to the vacuum value so transmissive optics (lenses) lose their refractive power, and they must be replaced by reflecting optics.
Multilayer Bragg reflector mirrors are the common solution with 70% reflectance but the absorbed 30% radiation creates a heat load on the mirror, which may introduce wavefront distortions and reflectance changes, resulting in a decrease of the overall resolution of the system. This heat distribution might not be uniform and may changes with time. So the resolving power of static systems could potentially be improved to provide the expected feature sizes on the semiconductor industry roadmap.

In order to increase the optical resolution and optical power throughput, and to make the EUV lithography process feasible, a novel dynamic adaptive optics approach is being developed. The Smart Multilayer Interactive Optics for Lithography at Extreme UV Wavelengths (SMILE) project combines active material (piezoelectric, pyroelectric) techniques and multilayer Bragg reflecting optical systems in order to dynamically correct the degradation in the projected wavefront and to tune the multilayer spacing to increase the total reflected optical power.

The project requires exploration of various wavefront measurement techniques at EUV wavelength, smart dynamic wavefront correction algorithms and development of piezoelectric/pyroelectric materials. To achieve this, University of Twente in collaboration with DIFFER, Carl Zeiss SMT, Deutsches Elektronen-Synchrotron, ASML and Flexible Optical have been awarded a grant to develop and investigate such systems.