Thin and ultrathin film technology is becoming increasingly important, as is reflected in the multitude of applications in nanotechnology, nanooptics, microelectronics, vacuum coating, catalysis, medical science, sensor elements, wear protection layers, and the synthesis of new materials. Usually, these hightech films are grown in a vacuum environment via atom deposition. Ongoing progress in many areas requires the production of metal films or multilayerfilms (multilayers) with increasingly special demands, e.g. flat on a nanometer scale. Nano-engineering demands detailed knowledge of the film growth process. However, comparatively little is understood of the atomic processes that govern the development of particular film structures as well as surface roughness. This lack of knowledge reflects the extreme experimental difficulties one faces when trying to obtain detailed atomic information during film growth or during a post deposition treatment. The current proposal presents a solution to this problem. In this project we develop a dedicated scanning tunneling microscope (STM) that is capable of following the atomic processes during deposition, in-situ and in real-time, under different fluxes and deposition conditions. We have already performed a successful proof-of-principle-test. Equipped with such an STM we address layer smoothness and layer growth control of thin films, which will enable: 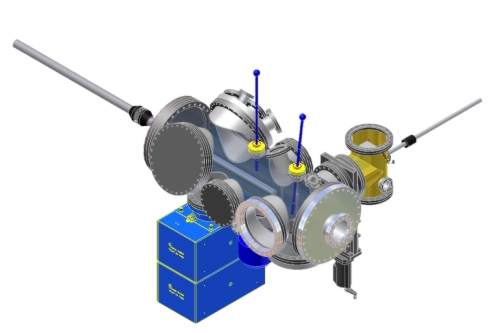