Aim of the project

Multilayer coated reflective optics for the reflection of 13.5 nm radiation is currently being explored for high-resolution photolithography for the manufacturing of integrated circuits. Yet, the ever increasing resolution demand of the semiconductor industry prescribes that future lithography equipment operates at an even shorter wavelength. Though the target of a wavelength of 6.7 nm, as aimed for in this proposal, is 'only' a factor of two smaller, this represents a tremendous challenge for the multilayer coating technology and the underlying physics processes. The individual layer thicknesses in the multilayer now become of the same scale as natural layer and interface imperfections and the reflectivity drops rapidly. The goal of this proposal is therefore to develop the multilayer deposition and characterization techniques to deliver similar near-theoretical reflectivity results as currently achieved at 13.5 nm. This proposal focuses on three essential topics: – film nucleation and layer growth, – suppression of thermal and photon-induced chemical and diffusion processes across layer boundaries, and – the use an exciting new analysis technique in the form of element-specific He ion microscopy with sub-nanometer resolution. 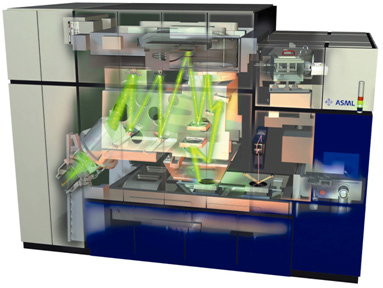 Impression of an all-multilayer based EUVL wafer scanner (courtesy ASML)