Nano-fabrication, the art to produce most advanced electronic, magnetic or mechanical devices, can only be as accurate as the best metrology available: the ability to measure limits the skills to fabricate.

The continuous downscaling of the critical features in modern nano-devices imposes tremendous requirements on the metrological methods and technologies. This trend is now calling for the development of new, non-destructive, 3D structural characterization methods. Potentially, X-ray scattering based techniques have ultra-high resolution and the ability to characterize buried structures due to a large X-ray penetration depth. There are a number of X-ray techniques that can be applied for 3D structural analysis, depending the type of the object. For example, grazing incidence X-ray scattering, GISAXS, is suitable for marginally structured, low-scattering objects, like organic particles on a surface. For the analysis of near-ideal 3D structures, like crystals and epitaxial films, X-ray diffraction, XRD, can be used. However, for the largest and industrially most important category, namely periodic 3D structures that are larger and less perfect then natural crystals, no solution was available so far.

Within the ChAT project we have successfully pushed the limits of the X-ray scattering technique for the characterization of a broad range of patterned, 3D structures. A so-called “many-beam” dynamical diffraction theory was applied to the calculation of scattering and electro-magnetic field distributions in 2D and 3D structures. This theory allows much faster simulation comparing to standardly used finite-element methods, an important feature that is essential for rapid data analysis. 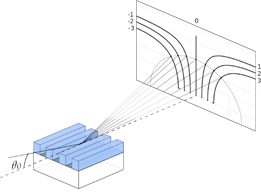 A semi-analytical solution was developed for the so-called Sherman equation for the calculation of the angular maps of the X-ray fluorescence yield, when modulated by an X-ray standing wave. Such maps hold information about the 3D distribution of atoms in the studied objects, however their analysis requires an iterative fitting of simulations to the measured data, requiring a near prohibitive amount of computer power: this Sherman equation could only be solved by a finite element method with a typical simulation time of many hours. The developed formalism allows a solution in less than a minute. This essentially allows the use of widely accessible laboratory X-ray setups (as opposed to large-scale synchrotron facilities).

The theoretical and practical knowledge developed in ChAT will be used in the NEXT 3D project (started in 2020) which is focused on the development of new characterization schemes for buried ultra-thin layers and interfaces and 3D structures.