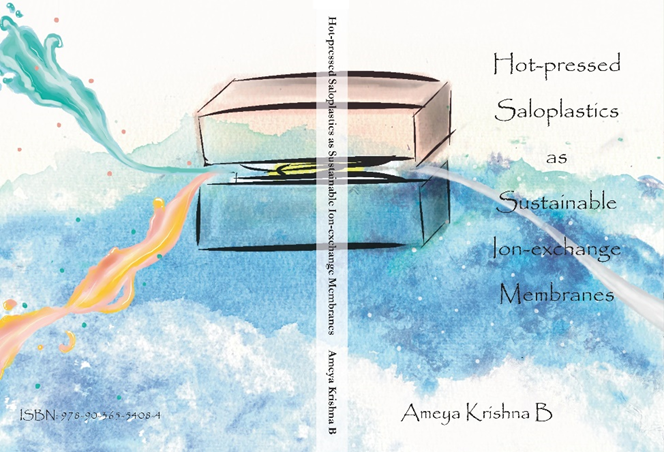 Ameya Krishna B is a researcher in the Membrane Surface Science group led by Prof. Dr. ir. Wiebe M. de Vos and Dept. of Molecules and Materials supervised by Dr. Saskia Lindhoud. In his work, complexes of charged polymers are softened with salt, and are used to fabricate dense material and further used as membranes for ion-exchange.

The thesis begins with an introductory Chapter 1 that places the work in the context of the needs of today and describes its objective in a larger frame. It informs the reader about membranes, especially for ion-exchange, including the principles governing transport through such materials. Polyelectrolytes and their complexes are introduced, and their processing into saloplastics is discussed. The advantages, especially in terms of simplicity and sustainability, of saloplastic membranes, are highlighted.

For the fabrication of dense saloplastics, the first pair of polyelectrolytes, PSS-PDADMA, is chosen in Chapter 2 and suitable conditions for their complexation are studied. Factors for complexation, such as molecular weight, concentrations, and salt content, and those for hot pressing, such as saltwater, temperature, pressure, and time, are explored. A mould is constructed and edges of different thicknesses are utilized to achieve control over the thickness of saloplastic films with a variation of just ̴5%. Suitable plastics are fabricated and their physical and mechanical properties are investigated. Increased mechanical strengths were observed following reinforcement of the saloplastics with woven and non-woven mats, all during the process of hot-pressing. Patterned projections in the micro-scale were also achieved by using suitable moulds.

The dense and charged nature of hot-pressed plastics led to the exploration of their membrane characteristics in Chapter 3. PSS-PDADMA combined in a stoichiometric ratio resulted in a positively charged saloplastic. At low salt concentrations (0.01-0.05 M KCl), it was observed to have permselectivity up to 96%, while at higher salt concentrations (0.05-0.25 M KCl) the values were < 60%. These effects were attributed to a relatively low charge density, as confirmed by a higher degree of swelling and lower ion exchange capacity than commercial membranes. The resistances were low, and the membrane showed a relevant mono to divalent anion selectivity. The membrane also showed good stability at low and high pH, the latter being an advantage for applications at extreme pH values.

Excess Na+ is known to be a major cause of soil toxicity and abiotic stresses in plants, especially in greenhouses and dry regions. The agricultural importance of K+ selectivity over Na+ is explained in Chapter 5, and an approach to enrich the K+ concentration is proposed. PSS:PVA saloplastics fabricated at 1:2.5 ratio were found to be modestly monovalent-monovalent K+/Na+ cation-selective, improving the selectivities observed for commercial membranes. A hypothesis is presented and the possible causes are discussed.

The ‘sustainability’ aspect of such dense saloplastics is further researched in Chapter 6 in terms of recyclability and non-autonomous self-healing properties. Saloplastics are shown to be recyclable over five times by the addition of high salt concentrations, filtering out any impurities, diluting to complexation conditions, and finally hot pressing. They are also demonstrated to be self-healing when

assisted by saltwater, which would be very handy, especially in saltwater applications. The advantage of salt-plasticized materials and their role in annealing is emphasized, leading to neutral plastics. Salt-annealing slightly loosens the chains and facilitates the incorporation of active enzymes in saloplastics. This is demonstrated using lysozyme, an antimicrobial enzyme that catalyzes the hydrolysis of bacterial cell walls. It is shown by lysozyme activity that the lysozyme is incorporated and remains active in the saloplastic.

A final chapter puts forth a general discussion and some thoughts on possible directions the work can be continued in.

Ameya's work was featured in UTODAY