Congratulations to Liniker Fabricio de Sousa for his poster award during the MPI Symposium Magdeburg.

Press Release of the MPI Magdeburg and the TU Clausthal

Materials scientists, electrochemists and process engineers met  from 23rd to 25th September 2019 in Magdeburg during the first international Symposium on „Insights into Gas Diffusion Electrodes“. The event was organized by the Max Planck Institute for dynamics of complex technical systems in Magdeburg and the TU Clausthal within the framework of the DFG Research Unit 2397 "Multiscale Analysis of Complex Three-Phase Systems". 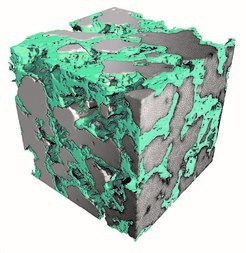 Gas diffusion electrodes are functional materials used in various technically important electrochemical processes such as fuel cells and metal-air batteries. Especially in view of the challenges of the energy transition, the further development of these materials is of particular importance.

More than 100 scientists from 18 nations as well as representatives and speakers from various industrial companies such as Covestro and C3 Prozess- und Analysentechnik GmbH (Process and analysis technology) met in Magdeburg from 23 to 25 September 2019 and discussed the latest developments in the field of gas diffusion electrodes. It became clear that only through joint efforts in the fields of material science, electrochemistry and process engineering it will be possible to better understand gas diffusion electrodes and to develop innovative processes on their basis.

During the symposium three poster prizes for young scientists were awarded.

The symposium was co-organized by Tanja Vidaković-Koch (Magdeburg) and Thomas Turek (Clausthal-Zellerfeld). The event was supported by the German Research Foundation (DFG), the Society of German Chemists (GDCh), the International Society of Electrochemistry (ISE) and the Otto-von-Guericke University of Magdeburg.