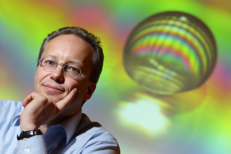 Prof. Mugele studied physics at the University of Konstanz (Germany) and obtained his PhD there in 1997 with a work in surface science studying diffusion on metal surfaces in ultrahigh vacuum. During a postdoctoral research stay (1998/99) as a Humboldt Fellow at the Lawrence Berkeley National Laboratory in Berkeley, CA (USA) he became interested in liquid-solid interfaces and confined liquids. As a research assistant at the University of Ulm (Germany; 1999-2004; habilitation 2003), he extended his work to wetting of functionalized surfaces, including in particular electrowetting. Since 2004, he has been full Professor of Physics of Complex Fluids at the University of Twente (The Netherlands). He is heading a group of approx. 25 researchers studying fundamental and applied aspects of fluids at interfaces on scales ranging from molecular dimensions to the millimeter scale. Prof. Mugele’s research interest include electrowetting, wetting of complex surfaces, dynamic wetting, drop dynamics, two-phase flow microfluidics, AFM spectroscopy in fluids, confined liquids, nanofluidics, optofluidics, colloids, (micro-)rheology. Application areas include inkjet printing, immersion lithography, lab-on-a-chip systems – and in particular enhanced oil recovery.

Prof. Mugele has published more than 140 scientific articles including the standard review on electrowetting.