Logic gates, the basic elements of our digital world, can now be built using one single molecule. An example is ‘XOR’, with two inputs. Is at least one of them ‘1’, than the output is ‘1’ as well, otherwise it is 0. These logic gates have a size less than two nanometer. They are based on ‘single electron transistors’, capable of assemblying and organising themselves on a surface. Molecular logic not only reduce the on-chip dimensions and lower energy consumption: it might well be that these circuits have similarities with the way our brain processes signals, says Prof Christian Nijhuis, who published his results in Advanced Materials.

The molecules are can operate like all logic gates – AND, XOR, OR, NAND, NOR, INT and XNOR. These all are 2-input-1-output circuits. The output signal will be 1 or 0 based on both inputs and the logic calculation. In today’s electronics, these gates are already small: on average they’ll consist of three transistors. In the latest chip technology, a transistor is typically 5 nanometer (a nanometer is one thousandth of a millimeter): the latest models of smartphones have hundreds of millions logic gates on board. Single-electron transistors are not just smaller, their energy consumption is very low. Both still are two bottlenecks in further miniaturization. On the other hand, today's chip manufacturing is a very mature production process that can deal with extreme complexity. 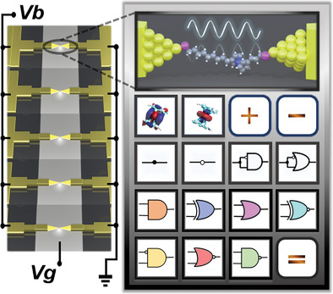 All logic gates can be made using one molecule (in the figure, top, the molecule bridges the two gold triangles).

The single electron logic calculators (SELCs) are built from molecules bridging the gap between two gold electrodes. The layer of material has a thickness of one single molecule. It will work thanks to a quantum effect called ‘Coulomb blockade’. Depending on voltage, the electron will be halted or flows through the molecule. As the effect mainly depends on voltage pulses, and not on a continuous electric current, the consumption is very low. In our brain, the connections, synapses, do hardly carry currents while they are controlled by voltage pulses, spikes. We know the our brain can perform great while using hardly any energy. 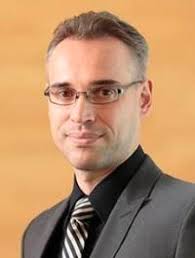 Prof Christian Nijhuis heads the ‘Hybrid Materials for Opto-Electronics’ group at UT’s MESA+ Intitute for Nanotechnology. He did this research in collaboration with colleagues  from USA, Singapore, China and Ireland.