A fully new way of coupling biomaterials to living cells, developed by the University of Twente, enables us to teach the body new things. Or, in turn, we can learn about the interaction of the cell and its surroundings. The biomaterial, in this case, is not connected to the cell surface directly, but via an intermediate step. This prevents immune reactions from happening, and also makes it possible to switch the connection on or off, at will. This can be in guiding stem cells or influencing cells around a tumor. Tom Kamperman and Jeroen Leijten, who named their new cell toolkit DOCKING - discrete on-cell inducible on-cell crosslinking, published their results in Advanced Materials. 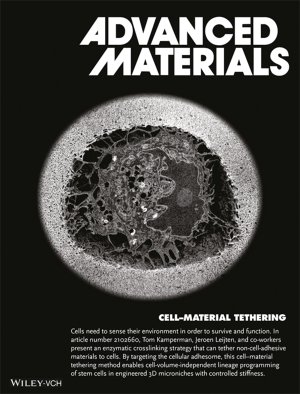 For cells it is vital that they ‘feel’ their surroundings. Mechanical properties highly influence the behavior of stem cells. For example: soft surroundings induce a stem cell towards forming fat, hard surroundings towards bone formation. In the majority of research and therapies, cells are combined with materials to which cells directly attach and feel the material. Cell binding materials like that, however, have the disadvantage of immune cells being formed as well. This initiates a strong immune response. This cannot be prevented in an easy way, and scar tissue may prevent the implant from working correctly.

The researchers now found a fully new way of binding cells to materials that are inert by themselves: normally speaking, they would not bind to cells. What the researchers use for that is the amino acide tyrosine that is present in and around cells by nature. The biomaterial will first be functionalized using tyramine, a molecule that has a structure that has a lot in common with tyrosine. By a cell friendly chemical reaction, the biomaterial can be connected to the cell ‘on command’. In this way, researchers can control which cells may ‘stick’, and at what precise location. Stopping the chemical reaction turns the material back to inert again. Selected cells can feel the biomaterial and allow stem cell control while there is no active formation of scar tissue around the material. 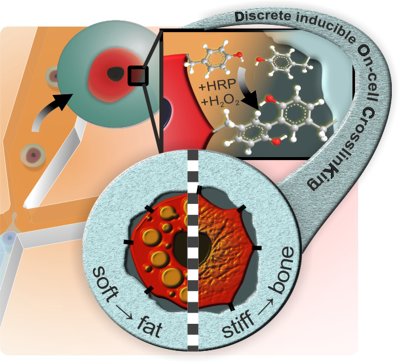 'Decision' within a day

The researchers use this new way of attaching to cells to get to know more about how a cell works, but also to stimulate cells and steer them using mechanical stimuli: will a stem cell turn to fat tissue or start forming bone? The new connection also makes it possible to answer new questions: at what moment does a cell need stimuli for steering it into a certain direction? The first experiments using DOCKING already led to the surprising conclusion that the main decision by a ‘hard or soft environment’ are already taken in a single day. This means that the initial surroundings of cells, determines how a wound heals or how a living implant may work.

Measuring and controlling stiffness in tissue also plays a role in many diseases, like in the vicinity of tumors. DOCKING offers a valuable toolkit for research and active impact on the interaction of cells and other materials. Using this toolkit, the researchers hope to boost research on regenerative medicine, drug delivery systems and cell therapy, up to cultured meat production.

The research has been done in the Developmental BioEngineering group, part of the UT's TechMed Centre. Tom Kamperman en Jeroen Leijten collaborated with the Optical Sciences groep (MESA+ Instituut), the Division of Engineering in Medicine of Harvard Medical School, the Physical Chemistry group of the Universität Bayreuth and the department of  Pathology and Medical Biology of the University Medical Centre Groningen