Photoacoustic or optoacoustic imaging is arguably the most exciting biomedical imaging technique of the decade. The method has captured the attention and imagination of applied physicists, applied mathematicians, biomedical engineers, and clinical imaging specialists, often with an affinity for biomedical optics and/or ultrasound, the two fields brought together in the method.

The technique typically uses short-pulsed electromagnetic radiation as probing energy, while detecting ultrasound generated by photon absorption and thermoelastic expansion. When short pulses of light are used, the thermal expansion results in a mechanical wave being generated originating at the locations where optical absorption took place. The mechanical wave has frequency components in the ultrasound regime, and can be detected at the boundary of the tissue using ultrasound detectors. From this point on the ultrasound source positions can be located using methods well known in ultrasound imaging. 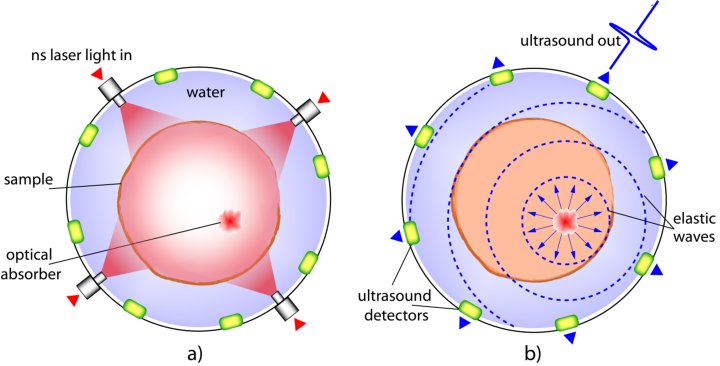 This is in contrast to purely optical imaging, where multiple scattering randomizes photon direction, thus deteriorating resolution and contrast when these photons are detected. The particular strength of photoacoustics in relation to imaging applications arises from the fact that the detected energy is not light, but is ultrasound, which generally undergoes considerably less scattering and attenuation in tissue compared with light. The consequence is that the spatial distribution of optical absorption can be ascertained deep in tissue with better resolution and greater penetration depths than achievable with other optical imaging methods.

The stress waves have frequencies in the ultrasound (US) range and propagate to the tissue boundary with low scattering and finite velocity. Using a plurality of US detectors, the signals can be detected and the origin of the photoacoustic (PA) sources localized. Thus, while detection of light, would have resulted in washed-out detail due to scattering, detection of US provides high spatial resolution. The PA method combines the rich spectroscopic contrast arising from the use of light as excitation, with the high resolutions arising from low-scattered US propagation and detection.

Ultrasound imaging transmits and receives high-frequency acoustic waves applied to the tissue forming images of regions which reflect and backscatter the acoustic waves. In the method, an ultrasound transducer probe (linear or matrix probe) is placed against the surface of the tissue with an acoustic coupling medium in between. Ultrasound is sent into the tissue at a specific high frequency characteristic of the transducer array. The ultrasound propagates through the tissue undergoing various interaction with tissue constituents which have different acoustic properties.

Due to different acoustic impedances (Z = D x vs where D is density and vs is the sound speed), between tissue types, tissue structures and tissue state, the ultrasound undergoes reflection. The reflected or backscattered ultrasound returns to the transducer where it is measured. The data can be reconstructed providing images of the tissues under investigation.

Ultrasound imaging is ubiquitous in the clinic because it offers real-time imaging capabilities, does not use ionizing radiation and is a mobile standalone device with a small-footprint.

There are four main directions in the group:

4) Development of phantoms for Photoacoustics/Ultrasound Imaging

We need highly creative, industrious and passionate students to help us move the field further. The backgrounds required are in Biomedical Engineering, Applied Physics, Technical Medicine, and Computer Science. If you are interested in making an important contribution to this area, contact Prof. Dr. Srirang Manohar (s.manohar@utwente.nl)