Nowadays, there is a huge requirement in using renewable power supplies, such as batteries. A more efficient and environmental friendly power device is clearly required, instead of using the electrochemical batteries and to lengthen the lifetime of portable electronic device [1]. The main point for these kinds of power devices is to gain electrical energy from the ambient energy surrounding. Current energy scavenging technology is mainly focused on natural source, such as solar, wind and thermal power. However, these energy sources are not optimal in case of specialized sensor device. Since mechanical energy from vibrations or movement is present almost everywhere [1], for more ubiquitous wireless sensor system, vibrational energy harvesting is a viable energy source.

Piezoelectric thin film is a chosen material for energy harvesting device, which offers a number of advantages in these systems, due to its high piezoelectric coefficients, high power output density and relatively low epsilon. Pb(Zr,Ti)O3 (PZT) was used for its good piezoelectric properties and being well controlled by Pulsed laser deposition (PLD) technique. Figure 1 shows the schematic drawing of a packaged device [1]. In my work, a new reliable technique is used to integrated PZT piezoelectric thin film into micro-electromechanical system for harvesting usable electrical energy during mechanical vibration. For making a better harvesting device, the figure of merit (e312/epsilon) [1] is vital to achieve a higher piezoelectric voltage in thin film. A variety of dielectric constant (ε) and piezoelectric coefficient (e31) were studied with different composition PZT thin film. An optimal figure of merit is show with Pb (Zr 0.52, Ti 0.48) O3 thin film at 1000nm thickness. 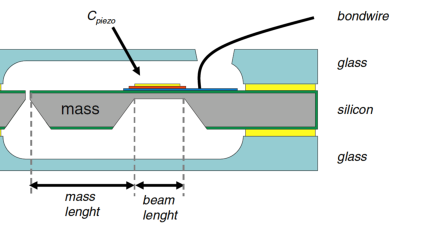 The research is supported by the Holst Centre, which was set up by IMEC (Flanders, Belgium) and TNO (The Netherlands) with support from the Dutch Ministry of Economic Affairs and the Government of Flanders.

This research project is executed by Xin Wan