Ferroelectric Pb(Zr0.52Ti0.48)O3 (PZT) thin films, due to the low coercive field and high remnant polarization near the morphotropic phase boundary, have been widely investigated for applications in non-volatile random access memory devices (FERAMs). Moreover, with high dielectric constant, it has become a leading candidate to be used as the dielectric in dynamic random access memory devices (DRAMs).

In our study, we use the epitaxial YSZ (Yttria-stabilized zirconia) layer as buffer-layer, to circumvent the diffusion of Si to the PZT and enable epitaxial growth of PZT and oxide electrode layers. The Si-substrates were covered in-situ with an YSZ buffer-layer before the PZT deposition. Si is one of the suitable substrates, which can be used to designing and fabricating piezoelectric micro-electro mechanical system (piezoMEMS) devices. The SrRuO3 (SRO) layers were used as the top- and bottom-electrodes for the PZT capacitors. SRO is an ideal electrode in devices incorporating oriented ferroelectric films, due to its relatively high thermal conductivity, and good compatibility in structure and chemistry with perovskite type ferroelectric materials such as PZT, PbTiO3 and BaTiO3. The structure of Si/YSZ/SRO/PZT/SRO capacitors is presented in Figure 1.

Figure 1: A schematic of the measurement circuit (a) and the SEM cross-sectional morphology of PZT capacitor (b). Columnar-structure growth dominates in PZT thin films. The columnar-structure seems to be advantageous in limiting the surface roughness (RMS roughness of PZT-250nm capacitor is 6.1 nm, which obtained from AFM measurement).

Figure 2a reveals the phenomenon of polarization fatigue about the PZT capacitor. The capacitor was fatigued by using pulses of 1 kHz and the amplitude of ±200 kV/cm. It is noted that the remnant polarization increased when increasing switching cycles up to 108 cycles, from 13.5 mC/cm2 to 36.4 mC/cm2 at initial stage and after 108 cycles, respectively. As shown in Figure 2b, the hysteresis loops before and after fatigue experiments are shown which the improvement of the rectangularity of the P-E loops during switching process. The remnant polarization increases with the fatigue number instead of decreasing, which suggests an increased volume fraction of de-pinned domain walls under a bipolar field in agreement with an increase in current peak intensity at Ec(1*). This indicates that the use of the metallic SRO-electrodes in the ferroelectric capacitors significantly improves polarization fatigue as compared with a metal-electrode such as Pt. 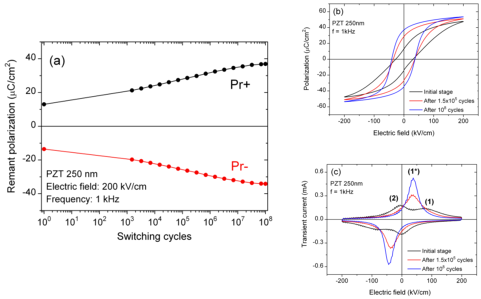 Figure 3: (a) Capacitance-electric field characteristics of PZT capacitors. As expected for ferroelectric property, the butterfly-shape behavior appears and the peaks in the C-V curves at the coercive field are due to a high domain-wall density and motion (extrinsic contribution); (b) Variation of dielectric constant (er) and dielectric loss (tand) with frequency of PZT capacitors.

This research is performed by Minh Duc Nguyen

Financial support is provided by MicroNed