The Applied Thermal Sciences lab aims at understanding some of the basic principles driving the non-equilibrium thermodynamic processes at low temperature. In recent years, our focus has been on the phenomenological understanding of the transient cooling characteristics of cryogenic substances and the oscillating flow heat transfer in small space and time domains. The research is problem-driven and several topics have an application perspective. We aim to foster a dynamic and creative environment for cutting-edge research and education in low temperature science and engineering.

Cryogenic substances are in a permanent evaporating or sublimating state at normal ambient conditions and exhibit a rather unique behavior involving numerous interesting physical processes. Besides heat and mass transfer during evaporation of a cryogenic liquid into a surrounding gas phase, in particular the interaction of a cryogenic liquid with other liquids or solids being at higher temperatures is associated with numerous physical processes eventually interacting with each other. E.g. bringing a cryogenic liquid into contact with a solid/gas or liquid/gas interface being well above the boiling temperature of the cryogenic liquid results in the so called Leidenfrost effect, describing the formation of a cushioning layer preventing contact between the liquid and the foreign phase (see Fig. 1a). Evaporation of the liquid, and the gas and heat flow through the cushioning layer of evaporating liquid together with external forces such as gravity interact in a way that e.g. liquid nitrogen droplets hover and dance on a plate instead of getting in direct contact with it. Besides fundamental experimental research, also theoretical modeling and numerical simulations are the means used to close current gaps of knowledge. A few images providing brief insight into a part of the experimental activities of the group are shown as an example in the figure. 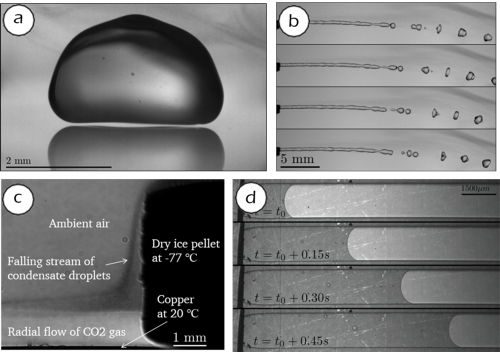 Example images providing insight into the activities of the ATS group, showing in a) a liquid nitrogen droplet in the Leidenfrost state, b) a stream of liquid nitrogen disintegrating into droplets under atmospheric ambient conditions, c) the edge of a dry ice pellet in the Leiden- frost state, and d) flow of isopropanol through a micro channel close to the liquid’s boiling temperature.

Another theme that we are active is the microscale heat and mass transfer involving short time scales as experienced in high frequency oscillating thermodynamic systems (e.g. in a Stirling system). Models and empirical correlations for heat transfer and pressure drop obtained for steady-state flows need to be examined carefully in their use with very short time scales.