Biopsies in daily clinical practice are often obtained with the aid of a biopsy (hollow) needle, core biopsies. After obtaining the biopsy, it should be preserved to keep the properties of the tissue as similar as possible to the in-patient situation. Ongoing biochemical reactions and decay are unwanted processes which will alter the biopsy properties. Most common fixation methods of tissue are: formalin (= formaldehyde solution), alcohols like methanol or ethanol and freezing.

Formalin fixation is routinely used. The protein crosslinking properties are ideal for structure preservation, after imbedding in paraffin the biopsies can be cut in thin slices and the tissue can be studied. But the crosslinking of the proteins makes this method less well suited when one wants to study the loose proteins themselves. Also the quality of RNA and DNA is detrimental effected by this fixative.

Freezing the tissue: By freezing the tissue the proteins are preserved well, and also the RNA and DNA can be isolated in good quality. So this is the preferred method for e.g. mass spectrometry analysis  of proteins.

In collaboration with the group of Prof. Henk Verheul, VUmc we are working developing a tissue snap-freezer with the following requirements: Quickly freezes a sample, does not need dry ice or liquid nitrogen, can be used in a surgery or biopsy room, can be transported easily and is easy to use. 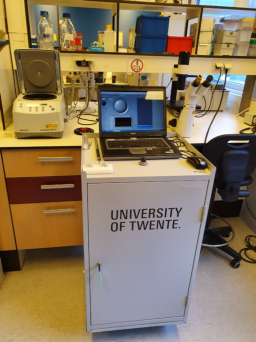 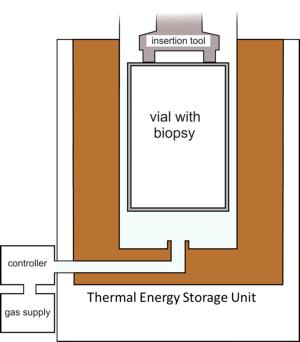 As a partner in a research consortium, the group of Prof. Dr. Stefan Raunser, director at the Max Planck Institute (MPI) of Molecular Physiology in Dortmund, receives considerable BMBF funding. Together with the group of Srinivas Vanapalli from the  University of Twente, the Dutch companies Delmic, Demcon kryoz  and CryoVac from Troisdorf, the Dortmund scientists want to develop innovative methods and improved workflows for the investigation of biomedical specimens using cryo-electron tomography. The project is funded with 2 million euros by Eurostars, a joint funding programme of the European Research Initiative EUREKA and the European Commission.

Proteins regulate all important biological processes, they are responsible for the functioning of our metabolism and for our perception of the environment. The protein haemoglobin for example carries oxygen in the blood. Muscles consist of the proteins myosin and actin. Even the smallest change in the composition of these proteins can disturb their cellular function by changing their interactions or stopping them from being in the right place at the right time - often with serious disease related consequences.

Cryo-electron microscopy (Cryo-EM), awarded the Nobel Prize in 2017, makes it possible to unveil the three-dimensional structure of proteins in almost atomic resolution and thus to investigate disease-relevant structural changes. The MPI in Dortmund is one of the leading research institutions in this field. However, the Cryo-EM field seeks to use the great potential of cryo-EM also for the investigation of large biological preparations like whole cells and tissue samples. The challenge is to visualize proteins in their functional natural environment.

One possibility is offered by a variant of the method: In cryo-electron tomography, cells or tissues are frozen at high speed. As a result, the water contained in the cells solidifies into a vitreous state which prevents the formation of ice crystals that would destroy the cell structures. The frozen preparations are then transferred to the EM, where they are examined at approx. -190°C. This workflow has to be performed as contamination-free as possible and without interrupting the cold chain. Similar to computer tomography in medical diagnostics, two-dimensional images of the sample are taken by tilting it relative to the electron beam. The series of images is than converted into a three-dimensional image.

However, due to the elaborate preparation and processing of the samples the method is associated with such a high technical effort that it is only accessible for a few laboratories in the world. The consortium, which has many years of experience in the fields of cryogenic technologies and vacuum systems, intends to use the funds to simplify the complex work processes involved in cryo tomography and thereby also to enable the examination of thicker samples like tissue sections. This includes the development of improved methods for the contamination-free transfer of samples into the microscope and the archiving of frozen specimens. With the introduction of the new workflow CETFlow (Cryogenic Electron Tomography WorkFlow), cryo-electron tomography is to be made accessible to a larger group of users, so that the technology can also be applied for specific medical questions.