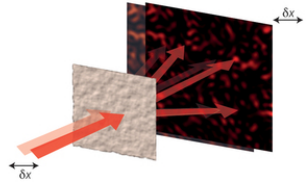 Correlations in wave propagation have been studied extensively in many fields of physics, ranging from solid state physics to acoustics, from optics to seismology. In a seminal publication in 1988, Feng et al. derived the existence of three types of wave correlations: C1, C2, and C3. Recently, a C1-type correlation, called ‘the optical memory effect’ is being exploited for imaging objects hidden at a distance behind a thin white screen.

In collaboration with the California Institute of Technology and the Exzellenzcluster NeuroCure Charité Berlin, we discovered an additional type of correlations that occurs only inside materials such as biological tissue, where light is mainly scattered in the forward direction. In contrast to the ‘traditional’ memory effect, the new ‘anisotropic’ memory effect also occurs inside the scattering material. Therefore, we expect that it can be used to image objects hidden deep inside biological tissue, using techniques similar to those already developed for imaging through thin screens.

Former UT researcher Jacopo Bertolotti wrote a News and Views article about our paper that gives an excellent introduction to the topic. The paper itself can be found here: