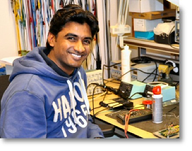 Mithun is originally from India where he obtained his bachelor degree in ‘Biomedical instrumentation’ at the SRM university (Chennai). Currently he is doing his master in ‘Molecular nanobiophotonics for telecommunications and biotechnologies’ at ENS Cachan University in Paris (France). His work in BMPI will concern preamplifiers that are used to interface the ultrasound detector and its electronics. Mithun will primarily focus on the ultrasound detectors for the next generation Photoacoustic Mammoscope, but his work will also be of interest for other instruments like the small animal imager.