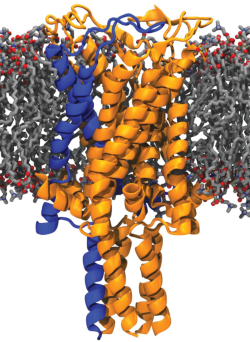 The goal of the work has been to elucidate the functioning mechanism of a mechanosensitive ion channel at the molecular level.

Mechanosensitive (MS) ion channels, present in membranes, are the molecules that sense membrane tension in all species ranging from bacteria to man.  In recent years many diseases related to the malfunctioning of MS channels were discovered such as cardiac arrhythmias, polycystic kidney disease, hypertension, glioma, glaucoma, atherosclerosis, and tumorigenesis. In spite of their importance, their working mechanism is still unknown.

The “simplest” forms of MS channels 'the mechanosensitive channel of large conductance (MscL)' from Escherichia coli, Lactococcus lactis, and Mycobacterium tuberculosis. have been the objects of the study of mechano-sensation for the past decade. They sense changes in membrane tension invoked by osmotic stress and as a response, undergo structural rearrangements (partial open states) and generate large transient pores in the membrane. Even when isolated from their native membrane environment and reconstituted into artificial membranes composed of synthetic lipids, they are still capable of mechano-sensing and responding to the alteration in membrane tension.

The highlights of the project are as follows. First, we gained control over the channel opening and closing such that we could study individual partially open states of the channel during its journey from the closed to the open state (1,2). This control and employing native ion mobility mass spectroscopy allowed us to observe the global conformational changes of the closed, individual partially open, and open states of the ion channel (3). Next, to learn about local conformational changes, we studied the interaction of the protein with its membrane lipid environment and generated new tools to interfere with these interactions for controlling the channel behavior (4-7). By employing these tools, and engineering the ion channel with tailor-made, environment-sensitive organic probes, we could finally observe local structural changes on the ion channel at its closed, partially open, and open states (publication in preparation). We explained experimental data with mathematical terms and made an algorithm that predicts conformational changes occurring from the onset of channel opening (publication in preparation). Combining all information allows us now to propose a functioning mechanism for this ion channel (publication in preparation).

During 2005-2007, we showed the potential of our ion channel (MscL) to function as a nano valve in liposomal nanocarriers, in vitro (1-4). Briefly, we produced MscL in E. coli. After affinity purification and labeling with tailor-made small chemical sensors, we reconstituted these engineered channels into stealth liposomes. The principle of the system is that, by default, ion channels stay closed, and the liposomal content stays inside the liposomes. However, upon a trigger (light, pH, or a combination of both) ion channels open due to the hydrophobic gating principle and release the liposomal content at once.

We showed that the liposomes decorated with the pH-sensitive version of our channel work well also in vivo. Together with the group of Prof. S. Cerdan, we showed that in the real tumor environment, our engineered drug delivery system has an unprecedented sensitivity of detecting the acidity changes with 0.2 pH unit sensitivity at the physiologically relevant pH range. The findings are published in Nanomedicine (5). The technology was chosen as a runner-up in a Science/Business event in Brussels by investors, and a business plan is prepared to launch a start-up.

In our fundamental work, we found out that our engineered channels could detect single molecules and generate detectable electrical and fluorescent signals (1-3). Therefore, this ion channel can be used in a biosensor as both the sensing element and amplifier.

The challenge has been to generate a platform that is stable enough to be carried around but also flexible enough to allow the channel to function. The solution was to make a hybrid system that is comprised of a solid support, mostly silicon oxide, with nano-sized apertures (4) and a patch of ion-channel decorated biological membrane that covers the apertures.  Indeed, with this strategy, we could generate both an electrical (5) and an optical multiplexed detection system (6) and managed to reduce the aperture size to the nanometer scale, which makes the hybrid system more stable. Finally, in collaborative work, we made a multiplexed nanopore biochip. Findings were, and a business plan is prepared as a first step towards a start-up company.