Today, in 2020, our campus is still sometimes seen as a man's world. But back in 1964, when the first student cohort of 244 men and 3 women arrived, that was certainly the case. When the University of Twente had first been set up three years previously, it was even stated that ‘girls study for purposes other than to become engineers’. So the campus was poorly equipped for the arrival of female students, and when the first female students did arrive along with the first cohort, Twente was faced with a few unforeseen problems. 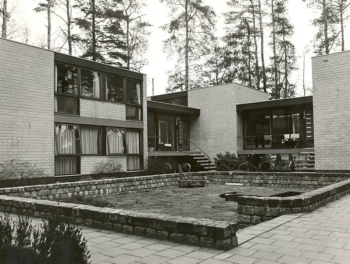 The ‘preparation committee’ was responsible for the setting up of the Technische Hogeschool Twente (Twente Technical College, THT) in its broadest sense – from recruiting professors to organising the introduction days, and from developing the curriculum to making sure there was accommodation for everybody. But the committee had assumed that only male students would be coming to live on campus. There was a lot of foot-dragging about accommodating the first female students, with an official stating in 1961 that ‘no accommodation will be built for girls’. But gradually it was accepted that women could not be denied equality, and even that ‘girls might have a positive influence’ on the student community.

And because three (tenacious?) ladies did decide to register as students at the THT in 1963, there was suddenly an awful lot to be arranged. Everything on the campus, right down to the toilet facilities, had been designed for male students only. Accommodation was another thorny problem, because there had to be a separate accommodation for girls. In those days, boys and girls living in the same building was completely out of the question, naturally! Homes were built for staff members on Drienerbeeklaan and Langenkampweg, among other places. The female students were assigned places in one of these staff homes. So they moved into Drienerbeekweg.

Later, an accommodation facility for girls was set up where the Logica building stands today. Staff who lived close to the ‘girls' quarters’ kept an eye on things there. Tjeerd Plomp, who was then a professor of Applied Educational Science, was one of those staff members, and he saw this supervisory task as an entirely routine matter. The same applied during the dances held in the evenings, when strict attention was paid to not dancing too close to each other... Females on the campus were, after all, rather scarce and were the subject of a great deal of attention. Rumours were rife. For example, it was claimed that the campus dean, Professor Jan Schuijer, walked past the girls' accommodation in the evenings to check that no male students were there, although he himself always denied this.

However, the staff were not the only ones who kept an eye on things. There was a separate accommodation block located next to the tennis courts for single male members of staff. It was popularly known as ‘Hankering House’, because the apartments directly overlooked the courtyard of the girls’ quarters.

As the number of female students rose, several more ‘girls’ accommodation blocks’ were later added. It’s unclear exactly when mixed accommodation became the norm. Perhaps some of our readers know more about that? But the fact is that women-only accommodation remained available for those that wanted it until September 1989. And even today it has not gone out of fashion completely – just look at all the girls-only student houses that there still are across the city, even now.