Marion Kamp likes to spice things up. In an earlier story, she explained Sterre Mkatini that her main task as director of operations is to connect people, to make sure that cooperation runs smoothly. Farien Prinsen Latka refers to this as ‘keeping lines open’ – something she too likes to do in her role as a security officer: ‘One team, one task.’

How do security officers at the UT look at the ambitions of Shaping2030, wondered Marion Kamp, Business Operations portfolio holder at the faculty of Behavioural, Management and Social Sciences. She asks Farien Prinsen Latka, who came to work as a security officer on the campus after a career at the Ministry of Defence. 'At the UT, it's just like in the army: you need all the cogs to get something moving.’

Marion: 'I have all kinds of wild ideas about your work as a security officer but I don't actually know much about it. What's a normal day like for you?'

Farien: 'Well, that depends on the shift. During the day, a lot of work involves issuing keys, answering the phone - service desk work. And responding to incidents, of course, but luckily they don't happen often. In the evening, we lock the buildings and keep an eye on the students. At night, we watch the grounds. One night, you might spend most of the time just patrolling the building. Another night, you have your hands full dealing with a student party. The nice thing about the UT is that you have a lot of interaction with students and staff, you meet everyone.'

Marion: 'Doesn't it ever scare you, walking through an empty building on your own?'

Farien: 'The first time I walked through the Horst building, I suddenly heard a squeak "ie-ie-eeh". That made me jump. Apparently, the printers were doing an update. But I'm not scared. If I were to really shout in your ear... my voice is a pretty awesome weapon and it's always primed! But honestly: I don't watch scary programmes before going to work.'

Marion: 'What's the most exciting thing you've experienced on campus?'

Farien: 'In the Cubicus, at the end of year party. Big party, barbecues, a busy night with lots of complaints about noise. I was doing the final rounds for the night...'

Marion: 'I can sense where this is going...'

Farien: 'It was already 4.30 and I hadn't yet done my second round of the Cubicus. That didn't feel right, I thought: I'll go now. So I run through the building and, out of the corner of my eye... no, I thought, I can't be seeing right. But I was. A boy and a girl, all the way. I get it, it's exciting, will we get caught? So, I can tell you: yes. Go home now, and next time in your room.'

Farien: 'Definitely! You need to be strict, but there is a funny side too. Then you return to the control room: let me tell you what I've just seen!'

One team, one task

Marion: 'With Shaping2030, we look ahead to where we want to go with the UT. What would you like to see happen in security?'

Farien: 'My favourite subject: keep the lines of communication short, talk to each other instead of complaining about each other. Before I came to the UT, I was in the army. There it really is: one team, one task. Here the departments can be very insular.'

Marion: 'So, look for connection. How do you do that?'

Farien: 'I'm a member of the employee council of CFM, the participation body. And I recently did a Lean Green Belt course - because I enjoy improving processes, as well as meeting other people. That narrows the gap between us. And I like to have a chat with people.'

Marion: 'It's nice to see how motivated you are.'

Farien: 'For me, the UT is just like in the army: you need all the cogs to get something moving. As facilities services, we ensure that others can do their work - that professors can give their lectures, that the labs are ready and safe for tests. No one feels comfortable if security is not well organised.'

Marion: 'I miss not being able to pop by and have a chat. With all this working from home, I realise how much you can get done just by walking around and meeting people.'

Farien: 'Yes, I get that. We are at work as usual, but I hear it from the people in the employee council too. You don't get to hear so much. Normally you might meet someone at the coffee machine, and you ask: "Did you see that mail? What do you think?" You need to see each other for that.'

Marion: 'What does interest me is: you come from the army and now you work in security - both male environments. How is that for a woman?'

Farien: 'I'm used to it really - between the ages of eight and seventeen, I played football with boys. I love pink and glitter, but I probably have a bit more testosterone than the average woman. You need to be able to handle certain things.' 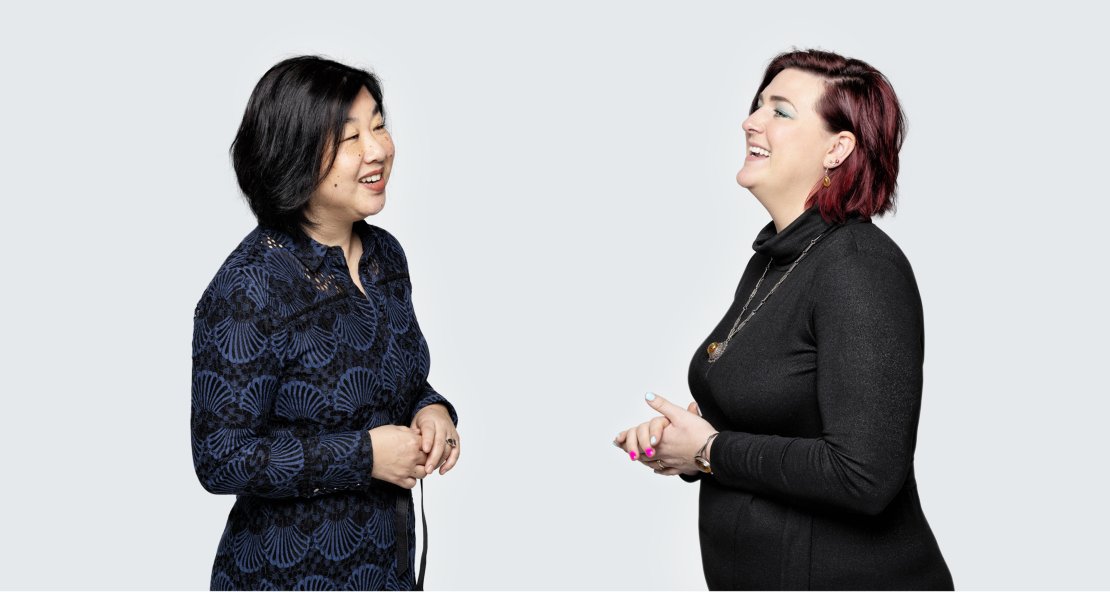 Farien: 'You mustn't be too sensitive. Men can be blunter. On the other hand, the cliché about women is that they can be nasty behind your back. I'd rather have that blunt honesty.'

Marion: 'Diversity is also an important theme at the UT. I really believe that teams that are diverse - in terms of colour, gender, nationality - work better and more effectively. Are you the only female security officer?'

Farien: 'No, actually there are quite a lot of women, around five. And we are pretty diverse. I have Polish roots. One of my colleagues has a Turkish background, and we are also quite different in terms of age.'

Farien: 'Definitely. In terms of physical strength, a man is often stronger - you can dispute that, but it's true. But women tend to be better at communication. You need that too in my profession. An example: if you see students making a fire, I go up to them calmly and say: if you put that out now, I won't report you. Then you get: "Yes, ok. We'll put it out". But if I run up to them shouting - "What do you think you're doing, what's your name?" - they'll just run off, which doesn't help. You need to take a motherly approach, calm but firm.'

Marion: 'You said that you have a Polish background...?'

Farien: 'Yes, my father's Polish, and so is my husband. His grandmother is still alive and lives on the coast near the port of Gdansk. A lovely place that looks over the place where the Wisla, the country's biggest river, flows into the sea. We take the whole family there every year. I'm Dutch with a Polish twist. I have Polish nationality but no passport. When the Netherlands play football against Poland, I initially support the Netherlands. But I'm not disappointed if Poland wins.'

Marion: 'And when Poland play Italy...?'

Farien: 'Then I support Poland! Incidentally, I like the fact that the UT focuses on internationalisation and looks over our borders. That's important, because we are all becoming global citizens. With our own characteristics, so we can learn from each other, but outside our boxes.'

Marion: 'Connected without judgement or framework.'

grew up in Twente. After studying at the Technical College in Enschede and graduating in business administration from the University of Groningen, she started work as an organisational advisor in healthcare. In 2001, Marion joined the UT as HR advisor. She held several management positions and since 2012 has been Management portfolio holder at the Faculty of Behavioural, Management and Social Sciences.

started her career at the Ministry of Defence, where she was responsible for communications with the Air and Traffic Control. After an intervening period with the Tax Authorities, in 2016 she came to work at the UT as security officer.