With his camera in his hand, Peter Timmerman captures his broad view of the world. Today, his subject is Jennifer Herek, dean of the Science and Technology Faculty, another versatile thinker. The two UT staff members share an interest in unusual architecture but are mainly linked by their passion for science which moves society forward. ‘I instantly fell in love with the campus.’

Jennifer Herek is dean of the Faculty of Science and Technology faculty at the University of Twente. Alongside Tanya Bondarouk, she is also ‘sponsoring dean’ of the Shaping Expert Group ‘Shaping Individuals and Teams’. Peter Timmerman, head of Studium Generale and keen architectural photographer, talks to her about her love for the campus: the epicentre and home to lifelong learning in Twente. High tech with a human touch.

Peter: 'I’m delighted to have the opportunity to talk to you, Jennifer! We regularly meet at lectures, for example, but there's a lot I still don't know about you. One thing I've always wondered is: how did you, an American, end up in Twente?'

Jennifer: ‘Well, how long have you got?! I started my academic career in the United States at a liberal arts college. After that, I moved into science and technology. I went to do a doctorate at Caltech, in California. Whilst specialising in laser spectroscopy, I met lots of international colleagues. And that led to my decision to come to Europe. I went to Sweden for my postdoc. For me, academic life in Europe is much more enjoyable than in America. The environment here is friendlier and more supportive. In America, everyone is much more competitive.'

P: 'Sweden, that must have been nice! My wife and I go there on holiday every year. I'm a big fan of the countryside and a relaxed atmosphere. And after Sweden...?'

J: 'After Sweden, I got a job at the FOM institute AMOLF in Amsterdam. And four years later, I was asked to come to Twente. I instantly fell in love with the campus. Based on the American model, they have also built staff accommodation on the university site. Around three thousand people live there. My children grew up on the campus. Occasionally we eat together in the university restaurant. And as toddlers, they'd often potter around the labs!'

P: 'Yes, I know that campus feeling. Didn't I see you recently at the open monuments day?'

J: 'Yes, I was there. Amazing! I saw such a lot and discovered so many new things. And our colleague Marko was there playing the bell chimes... there's so much talent here. And that's also typical of Twente.'

P: 'Typical of Twente, that's exactly the right description. For me, 'typical of Twente' is the combination of high tech and human touch. Technology and science often start in a lab, but it doesn't end there. How can humanity and society benefit from science? That's when it really becomes interesting, doesn’t it?

J: 'I agree. I'm a great supporter of a broad academic education. Looking beyond technology and seeing the impact on society. We train the future scientists, managers and politicians of the Netherlands. That's why it's important to not just teach students technology but to make them aware of our history, culture and society.'

P: 'At the same time, I do have concerns. I see too many students who don't have - or don't take - the time to broaden their horizons. They are more restricted than we were. Do you recognise that?'

J: 'Yes I do. And that not only applies to students, but also to staff. There is more bureaucracy, the workload is higher, there's more external pressure. At the same time, there is an increasing focus nationally on diversity. On recognising and appreciating diverse talents of "the new academic". It's also about interdisciplinary and interfaculty cooperation. And about the personal touch. These themes are also prominent in our manifesto 'Shaping Individuals and Teams'.

P: Have you got an example?'

J: 'A year ago, I spoke to a professor who wanted to take a sabbatical. He wanted to spend six months studying music at the music academy. He was a bit embarrassed when he told me, but I thought it was fantastic! Together, we used his sabbatical as a pilot, with learning goals and reflection to explore the impact on his academic career. I would love to be able to incorporate this stimulating, appreciative and personal element into our organisation.'

P: 'And how are things now with that professor? Do you notice any difference?'

J: 'He's only just returned. So, it's too soon to say. But I am certain that you can only become a better academic after such an enriching experience. It's interesting what you say. You've just called me influential, but if you ask me, you're the one who's influential!'

J: 'We are involved in Shaping 2030 together. With students, staff and society. It is a reflection of our identity, vision and drive. We are not an impenetrable fortress and we want to share knowledge. Have an impact and work together on building a sustainable, better world. With the wide programming and the activities of Studium Generale, you can ensure that we reach a larger group of people. Because that is really necessary - we are still too unknown. Which brings me to this: I want to use Studium Generale much more as a tool, also in our Expert Group. Studium Generale is practise what we preach.’

P: 'That would be fantastic. And if I could say something: I would like the activities of Studium Generale for students to be included in the Canvas timetable, among the other subjects. Could that be done?'

J: 'Yes, I think so. Your lectures and debates are not merely an amusing extra or a bit of entertainment, but a real part of our education programme. It would be logical to treat it as such and incorporate it in the programme. I mean, we have the vision, the facilities and the people to make that change. However, it will take a lot of work to create that space and flexibility in our systems. Perhaps timetabling them would be a good first step.'

P: 'Brilliant! Anyway, about that open monuments day. Because I'm a great fan of the architecture here. As a photographer, I've even published books about it! We are now looking out over University College, but what is your favourite building on campus?'

J: 'So, you're a photographer as well? I didn't know that! I love the diversity here. One of my favourites is the Cubicus, with all those corners. I never get bored of looking at it. That is a true labyrinth.'

P: 'You're right, the design is a reaction to the business-like, functional buildings which are also on campus. Cubicus used to have four entrances and you could even cycle underneath it. The building is really intended for you to get lost in and to promote unexpected meetings.'

J: 'Well, it manages that! It's a place where you often come across people!' 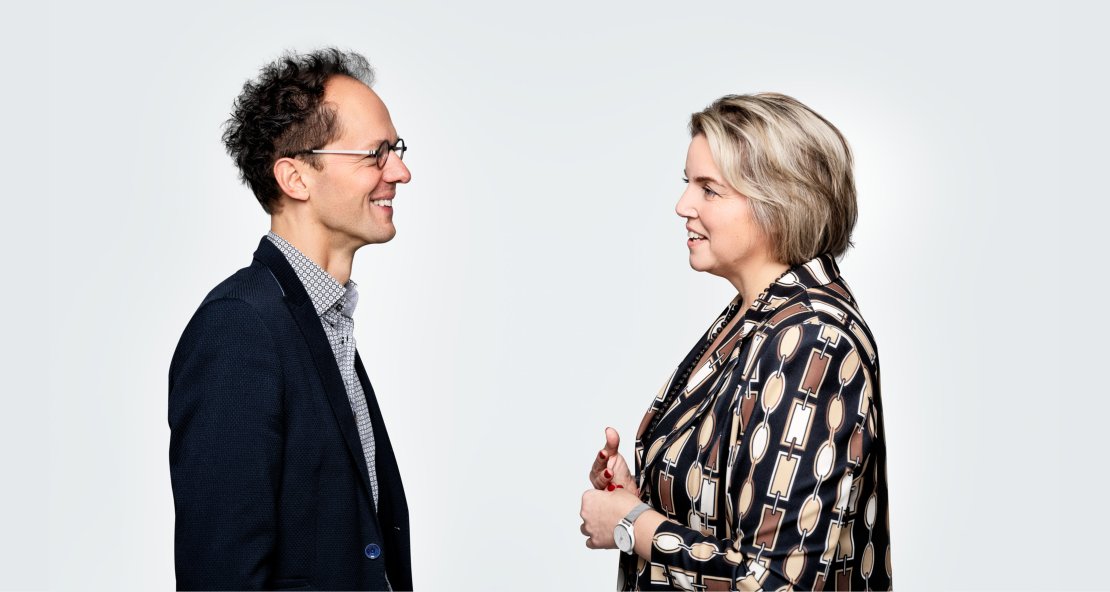 P: 'Jennifer, let's talk about Shaping 2030. May I ask you one last question? How do you see your life in ten years' time? Will you ever return to America?'

J: 'Oh... Possibly. By that time, my children will probably have left home. I'm open to anything, I don't have any long-term plans. I hope to work here for a long time to come and contribute to 'Shaping'. I have no idea exactly what I'll be doing in ten years' time. What I do know is that I'm not done yet. Here in Twente, there's always something to learn.'

is director of Studium Generale at the University of Twente. Furthermore, he publishes about architecture and photography. He is also the founder and director of the foundation Architectuur in Beeld.

was born in the United States. She came to Europe after her PhD at Caltech. She lived and worked in Lund (Sweden) and Amsterdam before coming to the UT in 2006 as professor and chair of the Optical Sciences group. Since 2019, she is the dean of the Faculty of Science & Technology.