After four busy years at the UT, departing rector Thom Palstra will soon have more leisure time. Time to run, for example. But also to develop further, because you are never too old to learn. In that respect, he has a good discussion partner in Peter Timmerman, head of Studium Generale. He too appeals for cross-fertilisation of knowledge - among students and staff on campus. 'We try to build a bridge between the islands.'

Peter Timmerman is usually the one asking the questions. As head of Studium Generale, he interviews dozens of experts every year. This time the roles are reversed: with rector magnificus Thom Palstra about to leave the UT, he is happy to give the floor to Peter. How does he view the developments at the university? And how does he see the future moving forwards to 2030? A conversation about peerless scholarship and how you give it a big platform.

Thom: 'This is a great moment to shine the spotlight on you, Peter. Normally, you are the interviewer. You can really empower people. I very much appreciate that!'

Peter: 'That's nice to hear! And that's our job: allowing our guests to shine.'

Thom: 'As an "external" rector - I've only been working at the UT for four years - it seems to me that everyone has worked here for ever. And you especially! How did you end up at the Studium Generale?'

Peter: 'More or less by accident, actually, in 2000. I had just graduated and was working part time as a kind of rampant reporter for the university newspaper. The paper advertised a vacancy at Studium Generale. It suited my background perfectly: journalistic work and talking to many different types of academics. I studied a combination of physics and philosophy and my interests are wide ranging. Our guests come from the entire spectrum of science, from archaeology to quantum mechanics.'

Thom: What did you find most fascinating, science or the people behind it? When speaking to you, I mainly talk with the human touch, and less with the high tech. Is that right?

Peter: 'Hmm... I love how scientists can talk so passionately about their work. We often only see the successful result. However, many things go wrong along the way. Ben Feringa had a great story about that. Just before he won the Nobel Prize in 2016, he was a guest in the Science Café. He was talking about his work on nanomotors, molecules which behave like engines. "Ben, that will never work," his colleagues told him. I love hearing about that human struggle. But I also find the science itself incredibly interesting. Those nanomotors, that is such an unprecedented invention!'

Thom: 'What about your own struggle? What issues do you encounter in your work for Studium Generale?'

Peter: 'I've been doing this for twenty years, but recently I've noticed that it's increasingly difficult to get students interested in our programme. We have such an amazing programme. But we often hear that students are too busy. When I was a student, I had two compulsory hours of practical sessions and the rest of the time was my own. Nowadays, students are involved in various group projects, with meetings and deadlines. Obviously, that has advantages because the drop-out rate is lower. However, I feel that it gives students less opportunity to develop interests outside their studies. What do you think?'

Thom: Yes, that's something we need to talk about. Studying is more than just learning the material. A good academic not only has new ideas. They can also motivate and are genuinely interested in others. That's the aim of group assignments. Through the Student Union, there is also a lot of attention for 'more than a degree', with a wide range of activities outside the study programme. I'd hope that this would be reflected in interest for Studium Generale. You have your doubts?'

Peter: 'There's certainly a lot on offer. But I really mean developing broader interests. Go and listen to a political talk or a lecture about black holes. When I was here on campus, I was also able to do courses at the art academy. Amazing. I was among real art students - a different world from the physicists here.'

Thom: 'I studied law for a year alongside physics. Didn't cost anything, you had all the facilities. As a university, should we actively reconsider something like that?'

Peter: 'Yes. There are many ways to promote that wider orientation. Some time ago, I went on a trip with colleagues from Studium Generale to the London School of Economics. All the lecturers there also give lectures to a wide audience. That's written into their contract. I'd like to see something like that happening here too.'

Thom: 'Their culture involves you having coffee or lunch with colleagues from all the disciplines. That doesn't happen at the UT. Our staff don't organise enough meetings across the disciplines.'

Peter: It's the same at many Dutch universities. With Studium Generale, we try to build a bridge between those islands. For example, we invite someone who builds drones, and get philosopher Peter-Paul Verbeek to reflect on the ethics. What is the impact of these devices on society? Connecting technology with philosophy produces interesting conversations. Which is really important for society! Marleen Stikker is coming to talk about the growth of tech companies. Without us noticing, they collect all kinds of meta data. Such companies are acquiring an enormous amount of power. Unintended perhaps, but it has a big impact on how society functions. As an academic, this is something you need to think about.'

Thom: 'That's why I no longer wear my fitness tracker. I bought it when I was training for the Batavierenrace, two years ago. The wristband records your pulse, how far you run and how fast. Brilliant technology. But all your data is sent to America. Incidentally, the recent programme Sunday with Lubach about conspiracy thinkers also got me thinking. He shows how the tech companies create a bubble in which conspiracy thinkers only hear themselves.'

Peter: 'We have a lecture coming up about conspiracy theories!'

Thom: 'Why don't you just invite the conspiracy thinkers themselves?'

Peter: 'We did consider that. But it's risky. My aim with Studium Generale is to help people, mainly students, to think critically. My experience with conspiracy thinkers is that you quickly get a yes-no discussion.'

Thom: 'We live in a bubble too. We need to look critically at ourselves as well. One of the main purposes of Shaping is to find more ways to connect with society. Not just develop technology, but also explore what will make humanity better. How do you feel about that?'

Peter: 'As a university, you also need to support the region, take your scholarship outside. Take this example: on the site of drained salt caves between Hengelo and Boekelo, the ground is subsiding. The idea was to fill the holes with sludge from the waste incinerator at Twence. But a group of residents had concerns: is this actually OK? At the UT, we show how our research can help answer residents' questions. We organised a conference with toxicologists and chemists. Based on that conference, the province ultimately decided not to continue with the plan. You can then very concretely demonstrate your strength as a university for the region.'

Thom: 'Brilliant. But, that's not the same as building nanomotors...'

Peter: 'Yes, I'd like to have that discussion with scientists. Should you do applied research or leave scientists free to follow their own interests? If we'd told Albert Einstein: "Albert, you can only focus on issues that are socially relevant..." The man was interested in totally abstract physics, completely exotic in those days, it didn't benefit anyone. Now his findings are indispensable.' 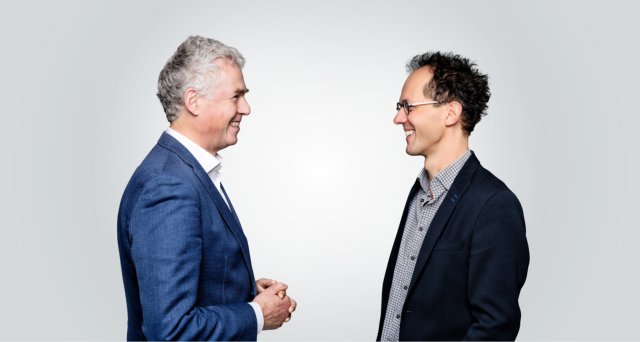 Thom: 'You need fundamental research to ultimately be able to do applied research. But people must feel part of that mission.'

Peter: 'Detlef Lohse, a renowned professor at the UT, is an inspiring example. He unravelled the fundamental principles behind sonoluminescence, how you can make light with sound. At the same time, he works with a printing company to get the ink drops optimally on paper. I love that. At Studium Generale, we also continue to emphasise the link between research and society. In each lecture that we organise, we show the outside world what is happening in the world of science. I get terribly irritated with people who say: 'science is just an opinion". Hello! Those scientists have spent years doing very precise research to unravel something.'

Thom: 'Perhaps people aren't always convinced because we don't tell a good story. We need to learn to present it better. In that respect, you are the link to society! You are now looking back at twenty years of Studium Generale. So, I'm sure you can look ten years ahead. What do you feel the UT should be in 2030?'

Peter: 'Ha, another easy question! Let's think. More time and space for students is important. That doesn't mean that they only need to go to Studium Generale. But I'd like them to explore more culture, set up their own businesses, develop more widely. And I'd love to be able to ask colleagues to give public lectures, like they do at London School of Economics. With Studium Generale, I hope to give a platform to even more interesting, famous speakers. As a gift to students and staff. Now that we do everything digitally, the world is even more accessible. I really see potential there. And I hope that in 2030, we will cherish the campus even more. I'm a great fan of architecture and our campus is unique in the Netherlands!'

Thom: 'During my first two years here as rector, I lived on campus, among the trees. Lovely. And everyone knows each other.'

Peter: 'The municipality sold the Drienerlo estate for a guilder to the former Technical University Twente. The architects had the freedom to design a totally new campus. It became a kind of utopian student town, a modern cloister in the woods, slightly set apart from the outside world and all the amenities. The buildings rise up from the green surroundings like signposts. One of the nicest moments of the year for me is the Batavierenrace. The campus is then transformed into a huge campsite. It's fantastic. That's something we should be more proud of!'

was Rector Magnificus of the University of Twente in 2016 until November this year. Before that, he led the Zernike Institute for Advanced Materials in Groningen.

is director of Studium Generale at the University of Twente. Furthermore, he publishes about architecture and photography. He is also the founder and director of the foundation Architectuur in Beeld.