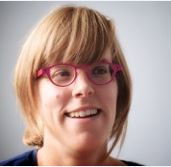 In this thesis the impact of a raindrop is studied using high speed laser profilometry and high speed imaging. ‘As soon as a drop impacts on a granular bed, both the drop and the target start to deform,’ says Rianne de Jong. ‘For wettable grains also mixing occurs.’

It is shown throughout the thesis, that drop deformation and sand bed deformation can be studied relatively independently. Rianne introduced the measurement of the maximum crater depth, as an input to estimate how much energy goes in either droplet deformation or sand deformation.

In one of the first chapters, while using hydrophilic glass beads behaviour, three types of muddy crater centres were denoted: doughnut, truffle and pancake shapes. ‘In the first two mixing is relatively slow,’ Rianne says. ‘But when mixing becomes fast, the liquid is already for the largest part inside the sand bed, before surface tension is able to contract the droplet. Then pancake-shaped residues are formed.’

A number of parameters were studied: the packing density of the sand bed, its wettability, grain size, the impact velocity of the drop, and the surface tension.

‘Then we shifted our attention towards the dry part of the crater,’ Rianne says. ‘It showed, among other things, that high-energy impacts on loose beds result in transient craters with the steepest slopes. We think here avalanches of grains become significant in modifying the final crater diameter, and shape!’

‘In the final chapter we looked into drop impact onto smooth surfaces,’ Rianne says. ‘We observed two types of splash regimes: a splash with an accompanying jet, and a splash plus the entrapment of an air bubble. The physics behind all these phenomena is as beautiful as it is complex.

Combining high-speed camera observations with laser profilometry, was decisive for the successful experiments in this PhD work.

‘My PhD work progressed in a steady way, as we knew quite well in what direction the project had to be addressed,’ Rianne says. ‘The research was fundamental in nature. No industrial partners were involved.’

Nevertheless, Rianne believes her findings have quite some application potential, for example the observation that fast mixing properties have no significant influence on crater diameters formed. ‘But it has its effect on droplet distribution,’ Rianne says.

‘While thinking about novel irrigation techniques, my hypothesis is that high energy impacts and fast mixing conditions are disadvantageous in designing more efficient irrigation strategies. Follow-up research on these agricultural questions would be worthwhile, I believe. Also other research areas may benefit from my work, for example astronomy, learning about crater forming on planets.’

During her PhD working period, Rianne learnt a lot on presenting her findings in publications and in presenting these on conferences and meetings.

‘I learnt to pay attention to the repeatability of my own experiments,’ Rianne says. ‘While research progresses one learns to recognize the main parameters already in early stages of theory building and designing experiments.’

As for her future job Rianne has some reservations on pursuing a career in academics. ‘A lot of time and effort will be on finding financial means for research,’ she says. ‘A profound vision and view on future scenarios is prerequisite to be successful as a Professor or Group leader.’

‘I may favor a job in industry, preferably at a smaller company as I believe the working atmosphere can be more informal there and one is able to bring in and follow own creative ideas. Also a policy maker function would be nice, for example working for a knowledge institution such as NWO.’