In this thesis, the response of liquid drops to the impact of a laser pulse is studied. ‘The pulse generates a local phase change,’ says Alexander Ludwig Klein. ‘This change is concentrated both in time and in space: it is localized to the drop surface, and much shorter than the fluid-dynamic response of the drop.’

Design, planning and construction of an experimental setup were an integral part of this PhD project. The response of the drop was visualized by high-speed and stroboscopic high-resolution imaging, in two orthogonal views. ‘All relevant timescales could be covered this way,’ says Alexander. ‘The laser impact is of nanosecond duration, whereas the fluid-dynamic response takes place on timescales much longer, up to several milliseconds.’

By doing so, a life history of the drop upon laser impact could be obtained, distinguishing between three stages: early time (the spherical drop is accelerated and gains kinetic energy); subsequent stage (in which the drop deforms into a sheet); late-time stage (the sheet undergoes a surface-tension limited expansion).

‘We found a separation of timescales for vapor-driven and plasma-driven drops,’ Alexander says. ‘For both systems we provided analytical and numerical descriptions for the kinematics, which we validated by experimental observations. I hope future researchers will benefit from the experimental and theoretical approach we have chosen, to study laser-matter interactions and laser-induced liquid motion in a broad range of experiments.’

Combining high-speed with stroboscopic high-resolution imaging, the response of a liquid drop to the impact of a laser pulse was found to be violent: the drop accelerates, strongly deforms, and eventually fragments. Shock waves, the ejection of matter, and even plasma generation may accompany this process.

‘I chose this subject of research because of its application relevance in the latest nanolithography machines,’ Alexander says. ‘Insight in these phenomena is of key importance for the generation of extreme ultraviolet (EUV) light, for the fabrication of leading-edge

semiconductor microchips. During the PhD work, it helped me to keep this potential use in mind, knowing that my results possibly will be used on a foreseeable time scale, and not only after ten or more years.’ 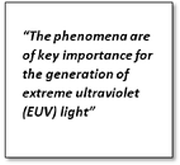 Alexander was happy to perform his work at the Physics of Fluids group (Twente University) as well as at ASML Campus in Veldhoven. His project was part of a FOM program, involving ASML, on the behavior of small tin droplets as encountered in extreme ultraviolet (EUV) nanolithography machines.

Alexander: ‘Our FOM-teamleader, Hanneke Gelderblom, worked with us on this program in Eindhoven. In total three PhD researchers from the Physics of Fluids group were involved. The collaboration took place in 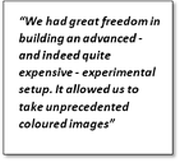 the form of an Industrial Partnership Programme (IPP) within the theme: fundamental fluid dynamics challenges of extreme ultraviolet lithography.’

‘We had great freedom in building an advanced - and indeed quite expensive - experimental setup. The freedom of research was a great opportunity for me, to work on this fascinating subject.’

Already in 2014 Alexander won an American Physical Society (APS) Prize at the Gallery of Fluid Motion. ‘Our complicated setup allowed us to take unprecedented coloured images,’ Alexander shares. ‘The importance of visualization in science is growing, as it triggers the interest of scientists for the subject.’

‘In 2016 we won in the category fine work of the Slow Motion Video Award in Japan, for our contribution on liquid jellyfish and piercing drops. In 2017, in Lunteren (the Netherlands), we were successful in

the Gallery of Fluid Motion at the JMBC Burgers Symposium. Images and slow-motion recordings stick to the mind. It is a great way to show the meaningfulness and importance of your results to the general public.’

After the early successes, Alexander worked thoroughly on the topic. ‘Being able to run through the full circle of the PhD research process, shaped my scientific senses. Experimenting, writing, reflecting, improving and learning anew, finally resulted in peer-reviewed publications. That is very rewarding.’

After his PhD Defence, Alexander will finish his work within the PoF team, also supervising an internship student.

‘As for my future career, I am thinking about that for quite some time already,’ Alexander says. ‘Before starting the PhD in 2013, I worked in industry for three years. So, my academic record is quite young still. Therefore, I favour to switch to a research job in industry again, to broaden my skills and also to broaden my interest fields. During my PhD work I’ve built up a small network. I hope to start within this network, extend it for the next years to come, and find out what role best suits me.’

“In 2017, in Lunteren (the Netherlands), we were succesful in the Gallery of Fluid Motion at the JMBC Burgers Symposium.”