In this thesis the fabrication and characterization of compact channel waveguide lasers were central.

Thulium-doped layers were grown onto undoped potassium yttrium double tungstates, by liquid-phase epitaxy. The concentration of the co-dopants and the dimensions of the buried channel waveguide, were chosen such that the overlap between pump and laser optical modes was maximised. All this whilst preventing lattice stress and cracking of the layers, and ensuring single-transverse-mode operation, at both the pump and laser frequency.

‘I spent a vast amount of time in the cleanroom,’ says Marko van Dalfsen. ‘The channel waveguides were transferred into the thulium-doped layer by using a photo-lithographic process, followed by an etching process using high-energy argon-beam ions.' During another liquid-phase epitaxy growth, these channels were overgrown with a double tungstate cladding, to obtain buried channel waveguides. 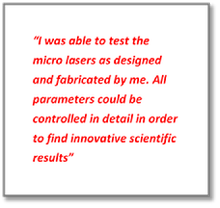 ‘During the master project I already gained experience in performing experiments in this area of research,’ Marko says. ‘The most distinctive and beautiful aspect of the PhD project, was to be able to test the micro lasers as designed by myself. By doing so, all parameters could be controlled in detail, in order to find innovative scientific results.’ 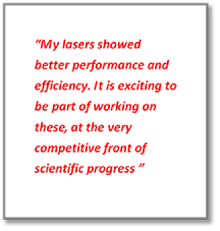 After 1,5 year of work Marko came up with the first very interesting experimental results.

‘Some mixed feelings resulted from this,’ he explains. ‘Spanish colleagues were able to show the same results some weeks before, and also published these. This was somewhat disappointing of course. On the other hand, it appeared my lasers had the better performance and efficiency. All in all, it is exciting to be part of working on these topics, at the competitive front of scientific progress.’

Building compact waveguide lasers promises to lead to cheaper and more widely usable instruments for detecting ammonia and CO2 in the future. Much bigger, table-top, setups are currently used for the detection of such gases. 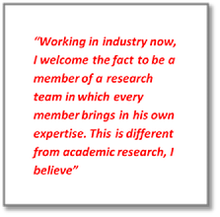 ‘We were able to show highly efficient output power and efficiencies,’ Marko says. ‘Though experimental work was central in my project, we certainly were able to contribute to theory, especially to fill in some open spaces. As the PhD work progressed I experienced that, while gaining deeper understanding, I became more aware of the knowledge gaps in this field of research. This is both exciting as it forces you to be modest.’

Now Marko is working in an R&D team at the BDR Thermea Group in Apeldoorn, a world leading manufacturer and distributor of smart climate and sanitary hot water solutions. 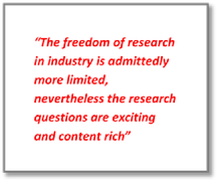 Marko: ‘I welcome the fact to be a member of a research team in which every member brings in his own expertise. This is different from academic research, I believe. Here also collaboration is requisite, but a PhD researcher is much more individually driven and responsible for his own project process. In industry finding theoretical evidence is subsidiary to business revenues. The freedom of research is admittedly more limited, nevertheless the research questions are exciting and content rich.’