In this thesis, first of all, a stream of widely spaced high-velocity droplets was demonstrated in a novel way. ‘Studying these ultrahigh velocity droplets involved a novel experimental, numerical and theoretical approach,’ Pascal Sleutel says. ‘In general, our results apply to inkjet printing, medical spray formation and 3D printing.’

In a next chapter, ultrafast high-speed imaging and advanced image processing were used, to capture and track individual monodisperse droplets. 'Here our results showed that changes in droplet spacing within a droplet train, are not only a direct result of initial velocity fluctuations but also of a spacing dependent drag coefficient ,' thus Pascal.

Further, droplet impact and bubble entrainment were studied in new regimes, below mm-size. Also oblique impact of drops on a solid and liquid surface was studied.

Pascal: ‘In chapter 5 we were able to construct an elegant theoretical model, to account for three different impact regimes: smooth deposition onto a pool, splashing in the direction of impact only, and splashing in all directions. We quantified the splashing threshold and the maximal cavity dimensions, by high-speed imaging above and below the surface.’

While studying new regimes, the interaction of experiments and numerical simulations is crucial, Pascal Sleutel explains. 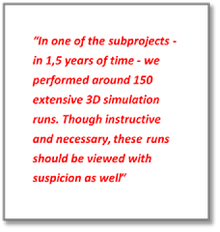 ‘In the early stages, exploratory experiments may show phenomena that are not accounted for yet in literature, or they show other results than in regimes already known in experiments described,’ he says. ‘From theoretical considerations and sometimes bold assumptions, in this area of research, we then build numerical simulations, and from performing these we gain critical understanding as to the phenomena under investigation. In one of the subprojects in my PhD - I guess in 1,5 years of time - we performed around 150 extensive 3D simulation runs. Though instructive and necessary, these runs should be viewed with suspicion as well. (For example axis-symmetry is a pitfall, greatly influencing the end results but in nature these aren’t perfectly present.) Therefore, extra experiments are always requisite. The true art is to start these with confidence.’

As one of the highlights of his PhD project, Pascal mentions the work in chapter five. Here the surprising outcome was that cavity created below the water surface influences the actual splashing behavior. Pascal himself was surprised too that: ‘… the angle of the axis of the cavity created below the water surface follows the impact angle of the drop independent of the Weber number, while cavity depth and its displacement with respect to the impact position depend on the Weber number.’ 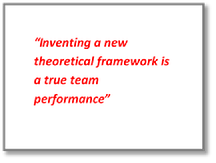 Pascal: ‘I learned that inventing a new theoretical framework is a true team performance. The collaboration with my colleague Marise Gielen was decisive here. All in all, I thoroughly enjoyed the discussions we had during the whole of my PhD project, especially the experimental ideas and expertise of Professor Michel Versluis. But the contributions of Professor Detlef Lohse, Jacco Snoeijer and

Hanneke Gelderblom, in deriving the scaling laws, were of equal importance of course. Also thecollaboration and input from experts of the Mesoscale Chemical Systems Group and BIOS Lab-on-a-Chip was important. Working on my PhD felt like being part of a close research community.’ 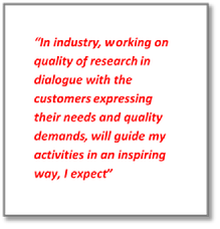 Now Pascal feels he is more all-round as a researcher and scientist than he was four years ago when he started his PhD. ‘I don’t think of me becoming that much smarter,’ he says, laughing. ‘I have grown substantially in experience gained, and in creative problem solving.’

Pascal looks forward to making his R&D skills contributory in an industrial setting. ‘I guess working there will be more structured,’ he says. ‘Working on quality of research in dialogue with the customers expressing their needs and quality demands, will guide my activities in an inspiring way, I expect.’