This thesis focuses on studying capping materials that prevent oxidation of underneath layers in several applications, for example in: microelectronics (gate dielectrics, memory devices), photovoltaics and extreme ultraviolet lithography optics.

‘A lot of research is performed on the development and use of these oxidation resistant layers already,’ says Roger Coloma Ribera. ‘Still a great lack of understanding exists, about the actual processes during growth and oxidation of these layers. Also the oxygen diffusion kinetics of the protective layers are to be studied in far more detail.’ 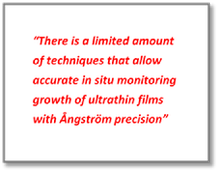 In situ XRR was also used to determine the in-depth electron density distribution during thin film ruthenium oxide growth. Diffusion rates and activation energies could accurately be obtained, as reported in Roger’s second paper, published in Journal of Applied Physics.

‘There is a limited amount of techniques that allow accurate in situ monitoring growth of ultrathin films, plus determining the thickness when the growing layer becomes closed with Ångström precision,’ Roger says. ‘We used quartz mass balances (QMBs), previously calibrated by ex situ XRR, to monitor the deposited thickness with high precision. In parallel, we also monitored the growth by in vacuo low energy ion scattering (LEIS), which is considered to be unique for the accurate determination when the layer is fully closed.’

‘Thus, from our experiments it could be extracted when the protective layer is fully closed and at what exact thickness of the layer this occurs,’ Roger says. ‘This is a crucial step when thinking about the future applications in microelectronics, photovoltaics and EUVL optics. This outcome illustrates the kind of advantages of the special and extensive experimental growth and analysis (LEIS) setup, I was happy to work with. A great tribute has to be made to Professor Hidde Brongersma in the early development of the analyzer for high-sensitivity detection, integrated in the LEIS setup that we had from ION-TOF GmbH. I am proud he is a member of my graduation committee right now.’ 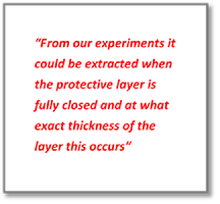 From the experimental work in the first stage of his PhD project, two interesting papers resulted, especially the first one in Applied Physics Letters. The actual morphology, the crystallinity and the chemical composition of the nano-columns observed on the Ru surface during thermal oxidation, and presented in this paper, were accurately resolved by the help of dr. Rico Keim, using cross-sectional HR-TEM. ‘Without this high resolution and meaningful pictures, the publication would have been much harder in this particular journal, if not impossible,’ Roger shares.

LEIS also gives information about the intermixing with underneath layer materials. Roger chose practical relevant samples, as he reported growth studies at room temperature for Ru on a-Si, usually the last layer in a-Si solar cells and EUVL multilayer mirrors. Ru has also been grown on SiN and SiO2 substrate layers. This study resulted in the publication of a third paper in Journal of Applied Physics. 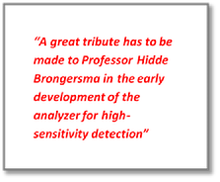 In the last chapter of his thesis, Roger investigated an alternative capping layer: ZrO2, which could be used to protect DRAM’s (dynamic random access memories), several CMOS devices and also solar cells and optics equipment.

‘In vacuo LEIS has been used here as well as in vacuo XPS, to study the initial stages of growth of reactive sputtered ZrO2 thin films on a-Si, for two gas deposition conditions,’ Roger shares. ‘ZrO2 is a suitable candidate as protective capping layer, because of its oxygen diffusion barrier properties during thermal oxidation, together with its amorphous nature and its surface smoothness, as we were able to observe.’ This study has also been accepted for publication in Journal of Applied Physics.

While carrying out his final research project thesis as a chemical engineer from Barcelona, as a master student, Roger was working in the Netherlands for the very first time in his life, studying crystallization processes involving paracetamol and other related compounds at the Process & Energy Laboratory at Delft University of Technology.

‘When I finished my chemical engineering degree, I was working on some projects at the IQS School of Engineering, part of the Ramon Llull University in Barcelona. At that time I felt the ambition to apply for a PhD-position in the Netherlands,’ Roger says. ‘Working as an experimentalist in this special research field within the XUV Group of Professor Fred Bijkerk, was a great opportunity to me.’ 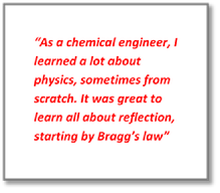 ‘As a chemical engineer, I learned a lot about physics, sometimes from scratch. Light and matter physics for example were totally unknown to me. It was great to learn all about reflection, starting by Bragg’s law. On the other hand, as a chemical engineer, I was able to transfer part of my chemical knowledge to my physicist colleagues, really showing them to incorporate, for instance, thermodynamics and kinetics of chemical reaction into their considerations. I loved the way ideas and knowledge were exchanged during the PhD project.’

Now Roger is applying for a suitable R&D position, preferably at a bigger company in The Netherlands where he could contribute with his considerable experimental skills, knowledge of the research field and experience in going through all phases during a complex research project.

‘During the PhD project, the XUV Group moved from Nieuwegein to Twente,’ Roger says. ‘My experimental setups were the first to be build up here in Twente, and also some new equipment was added. It was a hard time working on this – and writing my first publications at the same time – but it was all worthwhile at the end. I loved being part of the MESA+ institution where I followed several courses, including the fundamentals of nanotechnology. Also the facilities are great and the technicians and experts are approachable, always willing to help you out. For example using TEM was important for my PhD work. The equipment here was available to be used and the experts helped me on preparing the samples in the right way.’