In this thesis physical phenomena, like magnetoresistance, occurring in organic spintronic devices, were studied. ‘Increasing the understanding of these effects, and improving the control over interfacial properties during the fabrication of spintronic devices, are two mutually dependent key topics within this field,’ says Elmer van Geijn.

In this project two fabrication methods were explored for creating devices that contain clean, epitaxial nickel-graphene interfaces. ‘We attempted to measure perfect spin filtering in these devices,’ Elmer says. ‘This is predicted theoretically by work from the Computational Materials Science Group, led by Professor Paul Kelly. Therefore, our attention was focussed on the interface between nickel and multilayer graphene, and in particular on the transport perpendicular to this interface.’

Although the yield of working devices was seriously hampered by poor adhesion on the inert graphene surface, several working devices were produced. ‘We found a method to accurately select the surface area to be contacted by a top electrode,’ Elmer says. ‘This allowed us to perform valuable transport measurements at temperatures below 10 Kelvin, in a strong magnetic field.’

Additionally, an alternative fabrication route was investigated: to grow epitaxial ferromagnetic layers on top of graphene. If carried out carefully, the weak but finite interaction from the graphene film, showed to be enough to promote epitaxial crystallisation of the layer (with a preferential fcc (111) interface orientation). The resulting films showed ferromagnetic behaviour, albeit with a reduced magnetisation when compared to bulk nickel.

‘In general, we were able to observe new phenomena and characteristics in the exciting, relatively new field of organic spintronics,’ Elmer says. ‘The experimental results proved stable, and correlated quite well with the hypotheses.’ 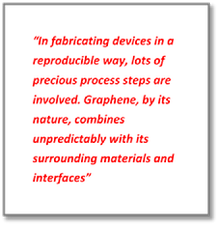 In his PhD thesis Elmer concludes: novel fabrication methods could be shown for the realization of devices containing nickel-graphene interfaces, that offer the prospect of obtaining clean, flat and structurally ordered interfaces, with a flexible choice of the number of graphene layers.

‘During the project, fabrication turned out to become the major and decisive part of my PhD work,’ he says. ‘In fabricating devices in a reproducible way, lots of precious process steps are involved. Graphene, by its nature, combines unpredictably with its surrounding materials and interfaces.’

Measurements performed on these devices, and on hybrid systems with molecular layers, showed some fascinating results.

‘They again prove the importance of interfaces within the field of organic spintronics,’ Elmer says. ‘Spintronics phenomena in organic devices are of a somewhat different nature than those in more commonly used semiconductor devices. Studying spintronics is very challenging, making the scientific content of my work even the more interesting. This was the main incentive for me pursuing my scientific goals.’

Elmer was happy to work in this challenging research field in which various new phenomena are still being discovered and characterized in reliable and reproducible ways. 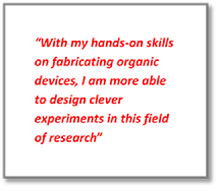 ‘Adding to the progress in organic spintronics, was very rewarding,’ he says. ‘I am now more skilful as a scientist. I am able to find my way in literature and combine the various statements made there. With my hands-on skills on fabricating organic devices, I am more able to design clever experiments in this field of research. That’s the way new science is produced; coming to deeper understanding of the matter, step by step.’

On hindsight, Elmer is positive as to the results of his PhD work. ‘Though several setbacks had to be overcome, the final results make up for that convincingly,’ Elmer shares. ‘It was a great privilege to work with the skilled experts at Mesa+, and sharing the wonderful equipment and lab facilities. I learned to continuously see the bigger picture of the complex project throughout the four PhD years, although one works on several research lines at the same time.’ 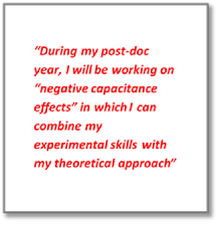 Elmer: ‘At this moment I still am a little hesitant on choosing for academics, or pursuing a career step in industry. For one year, I will be working as a post-doc at the Semiconductor Components Group, at Mesa+. Here I will be working on “negative capacitance effects” in which I can combine my experimental skills with my theoretical approach. I guess after the post-doc year, I will go and apply for a job in industry. I find it important to see what research will be like there. Though I value the freedom in academic research greatly, I am well aware that a lot of personal sacrifices are demanded, leading to uncertainties in my career opportunities as well as in my family life.’